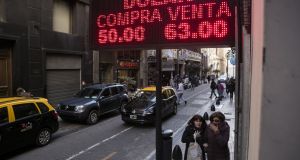 The peso weakened 30.3 per cent to a record low of 65 per US dollar on Monday. Photograph: Ricardo Ceppi/ Getty Images

Argentina’s beleaguered peso currency collapsed on Monday and inflation was expected to rise as voters flirted with a return to interventionist economics by snubbing market-friendly president Mauricio Macri for the opposition in Sunday’s primary vote.

The peso weakened 30.3 per cent to a record low of 65 per US dollar on Monday, traders said, after opposition candidate Alberto Fernandez – whose running mate is former president Cristina Fernandez de Kirchner – dominated the primary by a much wider-than-expected 15.5 percentage point margin.

Fernandez has said he would seek to “rework” Argentina’s $57 billion standby agreement with the International Monetary Fund (IMF) if he won October’s general election.

Argentine stocks were among the top losers on the Nasdaq and the local Merval stock index was down 28 per cent. Falls of between 18-20 cents in Argentina’s benchmark 10-year bonds left them trading at around 60 cents on the dollar or even lower.

The comprehensive victory by Peronists Fernandez and Kirchner “paves the way for the return to left-wing populism that many investors fear”, consultancy Capital Economics said in a note to clients.

“With a renewed focus on sovereign default risks, bonds, equities and the peso will come under severe pressure in the coming days. That said, falls in the currency might be tempered by intervention in the foreign exchange market,” it said.

Macri, a scion of one of Argentina’s wealthiest families, came to power in 2015 on promises to kick-start Latin America’s third-largest economy via a liberalisation wave.

But the promised recovery has not materialised and Argentina is in recession with inflation at more than 55 per cent.

An acute financial crisis last year hit the peso and forced Macri to take the IMF loan in return for pledging to balance Argentina’s deficit.

Despite Macri’s struggles, investors see the Fernandez ticket as a riskier prospect due to the opposition’s previous interventionist policies.

Argentina’s main political parties had already chosen their presidential nominees, allowing the primary to serve as the first concrete measure of voter sentiment after opinion polls showed a narrow margin between Macri and Fernandez.

“The key point there is that high inflation means the peso will need to continue to weaken to maintain its competitiveness,” Glossop added. He said it was “completely feasible” for the peso to drop to as low as 70 per US dollar.

Fernandez said the market reactions were in response to Macri’s failures on the economy.

Voters were given a stark choice to stay the course of painful austerity measures under Macri or return to economic policies that are heavy on state involvement.

“Macri has already implemented a number of short term measures to try and shore up support ahead of the October vote. Additional promises can be made, but the gap he needs to make up is a very wide one,” said Ilya Gofshteyn, senior emerging markets strategist at Standard Chartered Bank.

The primary result indicated that Fernandez had enough support to clinch the presidency in October’s first round, without having to go to a November run-off election.

A candidate needs at least 45 per cent of the vote, or 40 per cent and a difference of 10 percentage points over the second-place runner, in order to win the presidency outright. - Reuters