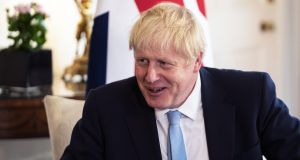 The slide in Irish consumer sentiment comes as British prime minister Boris Johnson says he is committed to taking Britain out of the EU by October 31st. Photograph: Will Oliver/Pool via Bloomberg 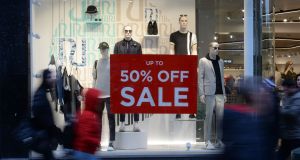 Irish consumer sentiment has slumped to a near five-year low amid signs the UK may crash out of the European Union without a deal.

The latest KBC Bank Ireland/ESRI consumer sentiment index fell to 85.5 in July from 90.5 previously, marking the weakest reading since November 2014.

The slide comes as British prime minister Boris Johnson says he is committed to taking Britain out of the EU by the deadline of October 31st, whether or not he can get a new deal with Brussels.

KBC economist Austin Hughes said the “Boris blues” in Irish consumer sentiment was in stark contrast to the “Boris bounce” in the UK, where sentiment has been lifted by the arrival of a new administration.

However, that was before the latest UK growth numbers showed the economy there contracted for the first time in 6½ years in the second quarter of 2019.

Mr Hughes said the drop in Irish consumer confidence likely reflected the tougher Brexit stance of the UK government and a lack of solutions from Mr Johnson.

“We previously noted that Irish consumers appear to be markedly more sensitive to emerging downside risks around Brexit than their UK counterparts. This may be the result of a range of influences,” he said.

“In part, it may reflect the fact that Brexit is not of Irish consumers’ making while some of those UK consumers who voted for Brexit may believe it will have positive economic effects or may feel adverse economic effects may be outweighed by other consequences.”

The scale of the recent crash in Ireland, he noted, had also likely scarred consumer thinking and made consumers inclined to focus more closely on downside risks to incomes.

“It is noteworthy that a substantial part of that relative improvement in Irish household incomes has occurred in the period since the UK’s Brexit referendum,” Mr Hughes said.

“However, through this same period, Irish consumers have become increasingly concerned about the risk that Brexit could prompt a renewed and substantial deterioration in their economic circumstances,” he added.

The drop in consumer sentiment here comes as similar confidence measures improved in the United States and the euro area despite stagnating growth and ratcheting trade tensions between the US and China.