Back for Business programme aims to help returning emigrants 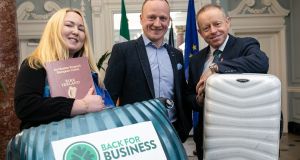 Designer Clare O’Connor, retailer Thomas Ennis and Minister of State for the Diaspora Ciaran Cannon at the launch of Back for Business

An initiative to help returning emigrants start and develop businesses in the Republic has been launched.

Back for Business is a five-month long entrepreneur mentoring programme specifically designed for those who have returned to live in the State over the last three years after being away for 12 months or longer.

The Department of Foreign Affairs and Trade-founded initiative will also consider application from individuals who are considering relocating in the near future.

According to figures from the Central Statistics Office (CSO), 28,400 Irish people returned to live in the Republic in the 12 months to April, up 1,000 on the previous year.

While many budding entrepreneurs may have gained substantial contacts, good language skills and a greater understanding of export markets, many also have gaps in their local knowledge due to having lived overseas. Back for Business is designed to bridge these gaps, while also addressing the general challenges all entrepreneurs face when establishing a business.

A pilot programme with 38 participants ran last year with all of the businesses taking part seeing a doubling of turnover during the six-months in which they participated. In addition, 27 jobs were created by participating companies, while six started exporting while the initiative was running.

“More and more Irish emigrants are returning home to Ireland to live and to work and as we have seen in the pilot, this is an initiative that can make a real difference to returned and returning emigrants who have a keen desire and ambition to be entrepreneurs,” said Minister of State for the Diaspora Ciaran Cannon.

“It is designed to support them to go beyond just creating a job for themselves and to aim higher and create a thriving business that can provide employment for others and value added in their local community,” he added.