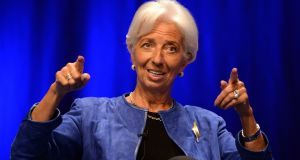 Christine Lagarde said the “more adverse international market conditions” had not been “fully anticipated” when the IMF and Argentina reached the deal in June. Photograph: Dara Mac Donaill/The Irish Times

Argentina’s central bank on Thursday raised its benchmark interest rate to 60 per cent from 45 per cent in a bid to control inflation running at more than 31 per cent as the country’s currency plummeted 15.6 per cent to a record low 39 pesos per US dollar.

The central bank issued a statement saying it called a special meeting of its monetary policy committee, which voted unanimously to hike its key interest rate “in response to the foreign exchange rate situation and the risk of greater inflation.”

The moves came a day after the International Monetary Fund (IMF) called for stronger monetary and fiscal policies in response to the meltdown of the peso, which has lost 52.2 per cent of its value against the greenback so far this year.

Despite signing a $50 billion standby financing deal with the IMF earlier this year, President Mauricio Macri is struggling to convince the markets that he can spur economic growth while he cuts fiscal deficits and combats inflation.

Yesterday the International Monetary Fund (IMF) said it was studying a request from Argentina to speed up disbursement of a $50 billion (€42.7 billion) loan program after a collapse in investor confidence in president Mauricio Macri’s government sent the peso tumbling more than 7 per cent on Wednesday.

It was the biggest one-day decline in the peso since the currency was allowed to float in December 2015. It closed at a record low of 34.10 per US dollar and is down more than 45.3 per cent against the greenback this year, prompting massive central bank interventions.

Nerves are frayed in Latin America’s third largest economy as it struggles to break free from its notorious cycle of once-a-decade financial crises. The last one, which was punctuated by a 2002 debt default, tossed millions of middle-class Argentines into poverty.

The run on the peso prompted Argentina to turn to the IMF for the $50 billion credit line earlier this year. As part of the deal, Argentina’s government pledged to speed up plans to reduce the fiscal deficit.

But given the peso’s continued depreciation, which makes the country’s dollar-denominated debts more expensive to pay, investors are increasingly concerned that the IMF help may not be enough.

“We have agreed with the International Monetary Fund to advance all the necessary funds to guarantee compliance with the financial program next year,” Mr Macri said in a televised address on Wednesday. “This decision aims to eliminate any uncertainty.”

“Over the last week we have seen new expressions of lack of confidence in the markets, specifically over our financing capacity in 2019,” Mr Macri said.

IMF managing director Christine Lagarde responded by saying in a statement that the multi-lateral lender’s staff would “reexamine the phasing of the financial program.” She said that the “more adverse international market conditions” had not been “fully anticipated” when the IMF and Argentina reached the deal in June.

“Authorities will be working to revise the government’s economic plan with a focus on better insulating Argentina from the recent shifts in global financial markets, including through stronger monetary and fiscal policies,” Ms Lagarde said.

Argentina has $24.9 billion in peso- and foreign currency-denominated debt payments due next year, according to official data.

Speaking to reporters after the IMF statement was issued, treasury minister Nicolas Dujovne said the government would reduce the size of its financing program, but did not provide specifics.

“The market is saying: ‘Just the fact that you are engaging in this conversation makes me very, very nervous,’” Daniel Osorio, president of New York-based consultancy Andean Capital Advisors, said in a telephone interview.

The peso’s decline has contributed to a jump in inflation, which hit a 12-month rate of 31.2 per cent in July. In response, the central bank has hiked interest rates to 45 per cent and sold more than $13 billion in reserves, including $300 million in an auction on Wednesday.

All that, combined with the budget cuts promised to the IMF that will slow down public works projects, is contributing to a recession that will result in an economic contraction of 1 per cent this year, according to the government. That could hurt Mr Macri’s re-election prospects in next year’s presidential race.

The June signing of the IMF deal reduced the need for costly bond market funding and briefly steadied the peso. The government has since announced more than $2 billion in budget savings, a process Mr Macri promised to continue.

“We will accompany the IMF support with all necessary fiscal efforts,” said Mr Macri, who was elected in 2015 on a free market platform after eight years of deep government intervention in the economy under previous president Cristina Fernandez.

“I know that these tumultuous situations generate anxiety among many of you,” Mr Macri said. “I understand this, and I want you to know I am making all decisions necessary to protect you.” – Reuters