Reversing the ‘brain drain’, a warning about tax breaks, and Druids Glen goes on sale 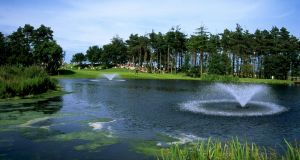 Druids Glen Hotel & Golf Resort is for sale from today, with a price tag of €45 million for the five-star resort

With the economy approaching full employment, Ireland is proving attractive again for Irish emigrants, with 28,400 moving back here from abroad, up 1,000 on the previous 12 months. And Ireland’s booming economy is attracting a new influx of foreign nationals while the number of people at work in the State is now nearly 20,000 higher that it was before the crash, new figures from the Central Statistics Office (CSO) show. The figures show the highest level of immigration overall since 2008, with 90,300 people moving here in the 12 months to April, up 6.7 per cent on the previous year.

The only tax break that should be considered in the upcoming budget is to allow middle income earners pay more of their taxes at the 20 per cent standard rate, according to economist Jim Power in a new report, as he urges the Government to avoid “pandering to populist pressures” come October 9th.

Mike Ashley’s Sports Direct is unlikely to get the green light to go ahead with its proposed acquisition of House of Fraser in Dundrum until the end of October. The store, which is now under the oversight of administrators EY, will continue to trade as normal in the interim.

Cityjet will operate its Dublin to London City Airport service on behalf of Aer Lingus under a new deal that will see the airline swap its brand for that of the larger carrier. While it means that Aer Lingus will now operate 50 flights daily between Dublin and London, Barry O’Halloran assesses what it means for the future of the Cityjet brand.

One of Ireland’s most prestigious golf venues, Druids Glen Hotel & Golf Resort at Newtownmountkennedy, Co Wicklow, is for sale from today on the international market. The price tag is €45 million for the five-star resort, which includes a 145-bedroom hotel and a 349-acre estate with two 18-hole championship golf courses.

As a further sign of the strength of the commercial property maket, London-based investor M7 has earned a ¤9 million profit on the €33.5 million sale of a Dublin office that it bought 20 months ago.

Canada’s top trade negotiator joined her Mexican and US counterparts in Washington on Tuesday in a bid to remain part of a trilateral North American trade pact, as US officials expressed optimism a deal could be reached this week.

Fiona Walsh reports from London on how, unlike the sympathy normally felt for companies on the brink of collapse, reports of the threat to the notorious payday lender Wonga, which fleeced and frightened its vulnerable and desperate customers throughout the financial crisis, have been greeted with undisguised glee on social media.