John FitzGerald: State’s ability to plan for the future is stymied by misleading CSO figures 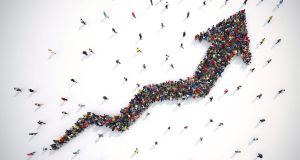 Ireland can look forward to a continuing rise in productivity for decades to come, provided the economy is managed well. Photograph: iStock

Since the mid-1700s, living standards have risen dramatically across the world.

First there was the agricultural revolution, where productivity on farms began to rise due to technical changes such as crop rotation and agricultural machinery. As agricultural output grew, farmers generated surpluses they could trade, and living standards rose. Fewer workers were needed to produce a nation’s food supply, and food surpluses on farms supported significant off-farm populations.

This paved the way for the industrial revolution of the 19th century. New production technologies and increased use of capital in the form of machinery, raised productivity in sectors such as textiles. Railways and steamships reduced the cost of transport.

While England was at the forefront of these revolutions, the know-how gradually spread to the rest of Europe and North America and then to the rest of the world.

As output per head rose, with individuals producing much more food or goods than they needed for their own consumption, it supported the dramatic rise in global living standards. And while the fruits of this transformation have been spread quite unevenly, all countries have benefited from the enhanced productivity of labour.

However, one US economist, Robert Gordon, has argued that 20th-century growth relied on two essential innovations – electricity and the internal combustion engine. He believes that the fruits of these discoveries have been fully realised and that, from now on, the increase in productivity in the US, the richest country in the world, will slow dramatically.

Over the past century, growth in US output per head was generally mirrored in a corresponding rise in real wages. However, as US productivity growth slowed down in recent years, US real wages have stagnated. As the rise in living standards people had come to expect ground to a halt, it fuelled the rise of US populism.

The UK has also experienced a near standstill in productivity growth since the 2008 crash, so the purchasing power of wages has also stopped rising. This again has contrasted with public expectations of continually rising living standards. As an example, UK productivity growth between 1990 and 2007 averaged 2 per cent a year, supporting a major increase in individuals’ prosperity. As in the US, this reversal of past trends has disappointed many, contributing to political disillusion and support for Brexit.

Even if Robert Gordon is right about an end to US growth – and many good economists disagree with him – it does not mean growth will slow inevitably in the rest of the world. It will take decades before the rest of the world has applied all the technological advances that can be learned from the US.

Other countries, including Ireland, can look forward to a continuing rise in productivity, and thus in living standards, for decades to come, provided their economies are managed well.

It is distorted, in particular, by what’s happening in the multinational sector. Not only do US firms move real activity to Ireland, they also, through transfer pricing and other tax planning mechanisms, attribute the location where much of their profits are earned to Ireland and other low-tax destinations. A consequence is a reduction in measured productivity in the US, and greatly increased measured productivity in Ireland.

However, the main driver of this increase in productivity is the intellectual property owned by US firms, rather than better use of Irish labour or of physical capital (machines and buildings) located in Ireland. So the headline growth is not available to raise Irish living standards, and it seriously distorts measured productivity in our economy, as well as reducing productivity in the US.

The CSO study shows that productivity in domestic firms has risen 2.5 per cent a year since 2000 – much higher than our EU neighbours or the US. This is likely to underestimate the true picture for our economy as it excludes the significant real (as distinct from paper) contribution of multinationals.

As real productivity and living standards are so closely linked, it is essential for future economic planning that we obtain better understanding of what is happening to productivity in Ireland and what’s driving it.

To this end we urgently need the CSO to provide more detailed data on output in Ireland, in particular a more nuanced look at output of multinationals, so we can get a good handle on the underlying reality.

1 Will your boss let you work long-term from home – or from abroad?
2 Plans for €2bn Dart expansion lure Bombardier to Dublin
3 McGuinness faces Brexit and Covid grilling at parliamentary hearing
4 Subway bread too sweet for the Irish tax authorities
5 City firms move £1.2tn and 7,500 jobs out of London - EY
6 Ryanair signals possible closure of Cork and Shannon airport bases
7 Not just another brick in the wall
8 Google tells workers to return to country where they are employed
9 Virgin Media unveils new entertainment platform
10 There may be trouble ahead for the housing market
Real news has value SUBSCRIBE