Ireland is most vulnerable nation in a global trade war, report shows 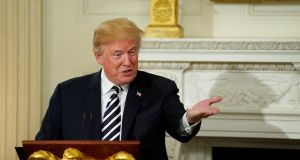 US president Donald Trump is expected to get a cold reception at the G7 summit in Canada later this week. Photograph: Joshua Roberts/Reuters

Ireland has most to lose from a global trade war, according to a report by German think tank Bertelsmann Stiftung.

The Republic was ranked first of 42 industrialised and emerging states in the group’s latest globalisation index, which ranks states on the basis of their levels of economic, social and technological integration with the rest of the world.

However, it came fourth behind Switzerland, Japan and Finland in terms of benefitting financially from globalisation, reflecting the fact that much of profits generated by multinationals here are repatriated elsewhere.

Nonetheless the findings indicate the Republic is extremely vulnerable to the creeping tide of protectionism internationally, which last week saw the US impose tariffs on European, Canadian and Mexican steel and aluminium imports.

The move has inflamed transatlantic and North American trade tensions and provoked retaliatory tariffs from Canada and Mexico, and a promise from the EU to impose tariffs on US goods well.

US president Donald Trump is expected to get a frosty reception at the G7 summit in Canada on Friday and Saturday, with the issue of trade likely to dominate discussions.

In Washington, US senators are attempting to block the president’s nationalist trade agenda, with new legislation that would restrict him from imposing tariffs on national security grounds without congressional approval.

However, Mr Trump, who campaigned on a pledge to negotiate better trade deals to save US jobs, has threatened to extend his punitive tariffs to the European auto industry, a move that could trigger an all out trade war.

Bertelsmann Stiftung’s report, which calculates the degree of international interconnectedness and the resulting increases in real gross domestic product (GDP) per capita from globalisation, indicated that people in the industrialised states benefitted most from globalisation.

While the Republic and the Netherlands were identified as having the most globalised economies, India and China were found to have the least, principally because they started the process later and still maintained many market entry and trade barriers.

Switzerland was found to have profited most from globalisation, with real GDP per capita growing on average by €1,910 per year between 1990 and 2016.

In Ireland, it rose by €1,261 annually over the same period, placing it fourth in the rankings. Conversely, India, the last ranked with respect to globalisation-related welfare gains, saw GDP per capita rise of only €20 per year.

In its note on Ireland, the report said that while the State was highly integrated with the rest of the world when it came to capital markets, it ranked only mid-table in terms of political integration.

“However, globalisation must be shaped in such a way so the focus is on the people. This is the only way we can live up to our promise of success,” he said.