Commission warns Italy it is in breach of EU budget rules 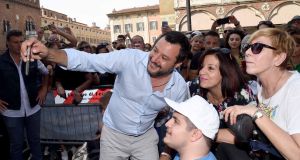 Brussels has warned Italy that it is in breach of EU budget rules, reigniting a row with the country’s anti-establishment government and kicking off a process that could end with Rome being fined.

The European Commission said on Wednesday that Italy had failed to meet agreed targets for reining in spending, making no headway in reducing the country’s mammoth public debt, which stood at 132 per cent of gross domestic product in 2018.

It also warned that Rome was on course to breach the EU’s core fiscal rule that a national government’s annual budget deficit should be no greater than 3 per cent of GDP.

Brussels said that Italy had failed to adhere to an agreed “adjustment path” for mending its public finances in 2018 and was “at risk of non-compliance” this year. It also warned that the government’s economic reform plan “contains only piecemeal measures” and “backtracks on elements of major reforms adopted in the past.”

The report is the first step in a process that, by July, could see the commission start a formal sanctions procedure against Italy, requiring the country to come back into line with the rules or face financial penalties.

The move risks inflaming tensions with Italy’s La Lega-Five Star government, which came to power last year pledging to rip up the EU’s fiscal rule book, and whose deputy prime minister, Matteo Salvini, has repeatedly called for sweeping tax cuts that would act as “a fiscal shock” to reinvigorate the economy. – Copyright The Financial Times Limited 2019