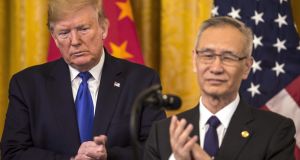 US president Donald Trump hailed a “phase one” trade deal with China on Wednesday as “momentous”, as he welcomed Chinese vice premier Liu He to a signing ceremony in the White House.

The agreement – the outcome of months of negotiations between Washington and Beijing – gave a reprieve to markets, suggesting a truce in the trade war between the world’s two largest economies that has been ongoing since 2018.

Under the deal, China has committed to purchasing $200 billion (€179 billion) more American goods over two years.

Existing US tariffs on about $360 billion of Chinese goods will broadly remain, though the US has halved 15 per cent tariffs on $120 billion of those products. Mr Trump also cancelled planned tariff increases late last year in a gesture to China as the trade talks intensified.

The president also indicated that he would remove all tariffs on Chinese goods once “phase two” of the agreement is completed, though negotiations are yet to begin and are unlikely to be completed before November’s presidential election.

Speaking at the signing ceremony, Mr Trump said that the US and China were taking a step “toward a future of fair and reciprocal trade”.

“Together we are righting the wrongs of the past and delivering a future of economic justice and security for American workers, farmers and families,” he said.

Mr Liu read a message from premier Xi Jinping, in which the Chinese president said the agreement was “good for China, for the US and for the whole world” and showed the two countries had the “ability to act on the basis of equality and mutual respect”.

But Mr Xi hinted that he expected the US to take a more benign view of China, at a time when Washington is tightening rules on foreign investment, imposing new export controls, pressuring allies to cut ties to Chinese businesses like Huawei and cracking down on Chinese researchers in the US.

However, the agreement leaves many issues unresolved. While it opens up the Chinese financial services industry to foreign companies, potentially benefitting credit card companies like Mastercard and Visa, it fails to address China’s massive state subsidies for its industries.

Similarly, while the deal is likely to benefit farmers and energy producers who will now be permitted to sell more products to China, other industries like car manufacturing and clothing retailers are unlikely to benefit from the deal.

Nonetheless, the agreement is likely to provide Mr Trump with a boost among the farming constituents in an election year.

The Trump administration has already sanctioned close to $30 billion in two separate farm bailouts for the agricultural industry, mainly in mid-western states that have seen their sales to China dry up as a result of the trade war.

The Trump election campaign hailed the trade agreement as proof that Mr Trump “keeps his promises to Americans”.

“After years of America being taken advantage of by foreign countries, President Trump is putting America First and fighting for America’s blue-collar workers,” his campaign said in a statement to supporters.

Among those in attendance at Wednesday’s ceremony – which took place as the House of Representatives was voting to transmit articles of impeachment against the president to the Senate – was Mastercard chief executive Ajay Banga, former secretary of State Henry Kissinger and Stephen Schwarzman, chief executive of Blackstone. – Additional reporting The Financial Times