Will the US economic bazooka fix the market rout? 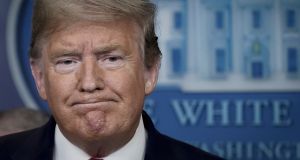 US president Donald Trump at his most recent Covid-19 press update. Photograph: Getty

Pinning hopes for a fast and lasting bounce in markets on massive stimulus from the US government? While no two episodes are the same, that’s not what happened during the financial crisis.

Expectations were high in October 2008, with Federal Reserve interest rates hurtling toward zero and Congress passing a $700 billion (€648 billion) bailout package for the economy (the package announced on Tuesday would be worth $2 trillion). Alas, none of it helped in the stock market, at least right away. Shares fell for another four months, piling up 40 per cent of losses before they began to rebound.

There are differences, of course, between the financial crisis then and the economic disruption today. But for traders wondering how firmly to embrace any rally, the parallels are enough give pause. If nothing else it shows what a mistake it can be to use daily or even monthly reactions in markets to judge a programme aimed at shifting the economy.

“It’s too early to ask for a quick fix. This is not the type of market where sugar makes a difference,” said Nela Richardson, an investment strategist at Edward Jones. “It’s going to take some time to restart the economy.”

While anything’s possible, expecting markets to come roaring back from a possible global recession requires saintly faith. The outbreak has shut down entire nations, locked borders and shuttered businesses around the world.

Some analysts are predicting unemployment so high and a slowdown so deep its only comparison is to the Great Depression. Based on Monday’s dismal reaction to a giant dose of Fed stimulus, rooting the market from its funk is likely to take time.

There are reasons comparisons with 2008 are somewhat difficult, said Michael O’Rourke, chief market strategist at JonesTrading. In 2008, the US economy was already months into a recession when TARP [Troubled Asset Relief Program] was passed – investors were getting their minds around the subprime crisis. The coronavirus crash has unfolded faster and with more drastic consequences. “The key difference is that the entire economy did not grind to a halt in 2008 as it has today,” he said.

Markets obsessed with Washington’s response should, according to Nicholas Colas at DataTrek Research, brace for the same type of stop-and-go action as marked the 2008-2009 recovery. Back then, the S&P 500 posted dozens of single-day rallies. Until March 2009, none of them went anywhere.

“We are mindful that 2020 is running the 2008 playbook at double/triple time,” he said. “The next flush down could, in other words, be days rather than weeks away.” – Bloomberg

Stocktake: ‘Stay long humility and short hubris’ 05:40
Read all about it: young people are willing to pay for news online 05:34
Stocktake: March was the ‘craziest’ month in market history 05:30
‘Haggling over prices costs you more in the long run’ 05:20
Coronavirus crash doesn’t mean that the market bears were right 05:15