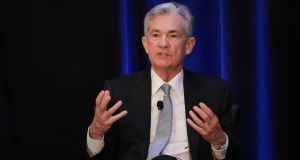 Jerome Powell, chairman of the US Federal Reserve, made it clear he would not resign if US president Donald Trump asked him to step aside. Photograph: Elijah Nouvelage/Bloomberg

Federal Reserve chair Jerome Powell offered an upbeat assessment of US economic prospects following a strong jobs report on Friday, easing fears of a 2019 downturn that had spooked investors in recent weeks.

Mr Powell said markets had moved “well ahead of the data” in pricing in risks to the US economy, following a sharp sell-off on Thursday and deep losses for equity investors during December.

“US data seem to be on track to sustain good momentum into the new year,” the Fed chairman told a conference in Atlanta. Along with his comforting words about the health of the world’s largest economy, Mr Powell said the Fed would take a “patient” approach to monetary policy tightening, contributing to a rally which sent the S&P 500 up by more than 3 per cent .

Mr Powell’s reassurance countered fears about the impact of US-China trade tensions and waning corporate profits on the American outlook, highlighted by a shock profit warning by Apple on Wednesday. Markets have also been hit by signs that the global economy is set for a slowdown.

Apple, which had been punished severely since issuing the unexpected warning on Wednesday, was carried by the positive momentum on Friday, also rising by more than 3 per cent.

Mr Powell’s comments also offered some breathing room to the Trump administration as it grapples with new Democratic opposition in the House of Representatives, a government shutdown and internal turmoil.

On Thursday, Kevin Hassett, chairman of the White House council of economic advisers, stoked fears of a slowdown when he warned that “a heck of a lot” of US companies with sales in China were on track to see lower profits. But, speaking on Bloomberg TV, Larry Kudlow, US president Donald Trump’s economic aide, dismissed that view.

“It’s a little easy and inaccurate to say all of these American companies are going to crash,” Mr Kudlow said, adding that there was “a much better, more optimistic picture”, with “no recession in sight”.

As markets have soured in recent weeks, Mr Trump has lashed out at Mr Powell over the Fed’s plans to increase interest rates. On Friday, Mr Powell brusquely asserted his independence. Asked if he would quit if asked to by Mr Trump, he replied: “No.”

Crucially for markets, Mr Powell also backtracked on previous comments about the Fed’s operation to reduce its balance sheet as part of the unwinding of post-crisis quantitative easing.

Mr Powell last month said the shrinking of the Fed’s balance sheet was on autopilot, remarks that helped trigger a sharp downturn in US markets afraid the programme would depress asset prices. But on Friday he said that while he did not think that the turbulence had been caused by concerns over the shrinkage, the Fed “wouldn’t hesitate” to change balance sheet policy if needed.

Earlier on Friday, data showed the US economy last month had its strongest job growth since February while wages accelerated at a quicker pace.