Revenue seized €75m worth of illegal cigarettes, tobacco and drugs in 2018, figures show 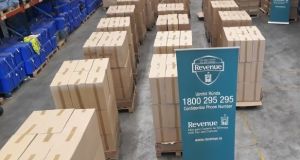 The number of contraband cigarettes seized by Revenue last year almost doubled to 68 million as the State’s tax authority continued a crackdown on the “shadow economy”.

Publishing results for 2018 on Friday, Revenue chairman Niall Cody said that the organisation continued to “target and disrupt” the shadow – or “black” – economy, seizing illegal cigarettes, tobacco and drugs worth a total of €75.7 million.

The figures show that last year Revenue seized 67.8 million contraband cigarettes, almost twice the 34.2 million that its officials confiscated in 2017.

“This included 23.5 million cigarettes, with an estimated potential loss to the exchequer of €37.5 million, discovered in March in a counterfeit cigarette factory,” Mr Cody said.

Revenue’s discovery of a factory in Jenkinstown, Co Louth, contributed significantly to its haul of illegal cigarettes last year, which its figures show were worth a total of €41.23 million.

Tax and customs officials also confiscated 1,871kg of other tobacco products, worth €1 million, in 2018, broadly the same quantity and value as in 2017.

Cocaine and heroin combined were the biggest contributor by value to the €33.5 million worth of illegal drugs found by tax and customs officials last year.

They also captured 511kg of herbal and resin cannabis, worth €9.14 million and 5,781kg of drugs such as amphetamines and ecstasy, worth €7.65 million.

The overall value and amount of illegal drugs seized by Revenue officials last year was down sharply on the €58.7 million they discovered in 2017.

Total seizures of criminal cash, illegal alcohol and vehicles, were also down, at €2.54 million last year, compared to €14.4 million in 2017.

Revenue regularly detects attempts to export or import cash into the Republic. Seized cash is transferred to the exchequer for the benefit of the State.

The number of illegal motor fuel traders shut down last year trebled to 12. However, the volume of commercial oil seized fell to 109,925l in 2018 from 130,585l the previous year.

A Revenue spokesman noted that it was difficult to analyse if rises and falls in detections of contraband cigarettes and other goods reflected actual criminal activity.

Last year, a report for Revenue and the Health Service Executive’s National Tobacco Control Office found that 13 per cent of the cigarettes smoked in the Republic were illegal in 2017, compared to one in 10 the previous year.

Revenue is responsible for customs, whose role is to prevent smuggling. The work involves patrolling 3,000km of coast, as well as checking movements in ports and airports. Customs is also responsible for monitoring international post.