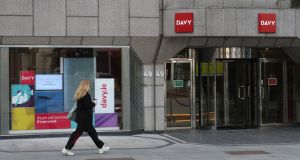 As the fallout from the Davy scandal continues, the broker on Monday evening said it had closed its bond desk, resulting in four redundancies. The brokerage said that, following the move, none of the 16 individuals involved in the controversial 2014 trade was working for the firm. Joe Brennan reports.

Meanwhile, Joe also reports that Davy’s interim chief executive Bernard Byrne promised the stockbrokerage’s 700-strong workforce that the firm would move quickly to try and address failings that resulted in the firm receiving a €4.1 million fine and rebuke from the Central Bank last week.

Staying with Davy, Fiona Reddan has an explainer on who was involved, what happened and what the likely fallout will be.

Motor insurers have been accused of “sidestepping” the issue of refunds to customers impacted by the pandemic, Eoin Burke-Kennedy reports. Covid-19 travel restrictions means the industry is expected save hundreds of millions of euros in reduced claims – up to €290 million for 2020 alone, according to one calculation.

The Iveagh Garden Hotel on Dublin’s Harcourt Street has secured planning permission for an extension that will increase its bed capacity by almost a third, despite opposition from a planning inspector and Dublin City Council. Sean McCárthaigh reports.

As the months tick by and vaccinations increase, one could expect that the impact of the pandemic on our personal finances will subside like the wave of infection is expected to do so. But Fiona Reddan wonders if this is really going to be the case? Or could the greatest challenge be in front of us?

Gordon Deegan reports that Dublin law firm Byrne Wallace is objecting to plans by US property giant Kennedy Wilson to construct a new office campus at St Stephen’s Green that will have the capacity to accommodate 3,000 office workers.

In his Stocktake column, Proinsias O’Mahony asks, is the TINA trade – There Is No Alternative to stocks in a low-rate world – in trouble?

People in Ireland could soon be able to book e-scooters through the taxi app Free Now, following a deal it has made with micro-mobility operator Tier, reports Colin Gleeson. The partnership follows the Government’s recent announcement that it will legalise e-scooters on roads, with the legislation expected to be passed in the coming months, followed by city tenders.

Fortus, a Dublin-headquartered supplier of security products, has made two acquisitions for a total outlay estimated at more than €10 million. Mark Paul reports that the company has bought British security products supplier Enterprise Security Group and, in a much smaller deal, it also bought Northern Ireland-based CCTV company Re:Sure Intelligence.

Dominic Coyle answers a question from a reader who wonders if paying off his mortgage early will count against him in the future; and another who is wondering about inheritance tax and whether his unmarried parents tying the knot would give them greater protection and make things less complicated.

In her media column this week, Laura Slattery writes that the Return of BBC Three shows linear TV is not quite dead yet.