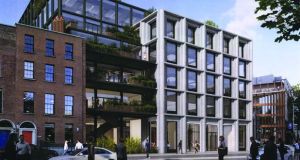 Kennedy Wilson has lodged plans to demolish the existing five- to seven-storey block and replace it with a four- to eight-storey building and provide 32,101sq m of office space.

Dublin law firm Byrne Wallace is objecting to plans by US property giant Kennedy Wilson (KW) to construct a new office campus at St Stephen’s Green that will have the capacity to accommodate 3,000 office workers.

Kennedy Wilson has lodged plans to demolish the existing five- to seven-storey block and replace it with a four- to eight-storey building and provide 32,101sq m of office space.

Byrne Wallace occupy neighbouring offices at 88/89 Harcourt Street and in an objection lodged against the proposed campus, the law firm contends that the KW scheme “constitutes excessive density”.

The objection states that the protection of client confidentiality is of utmost importance to Byrne Wallace.

Byrne Wallace argue that the scheme “potentially jeopardises the privacy of our clients and our ability to preserve and protect client confidentiality”.

In a separate objection lodged on behalf of Davy Target Investments, BKD Architects state that the overbearing design, scale and massing of the scheme “is of serious concern”.

BKD state that Davy Target Investments’s “significant concerns” can be mitigated by considered design revisions to the scheme.

In a separate objection, Kevin Duff, Dublin city officer with An Taisce, has described the planned KW scheme as “overblown” and contends that it will detrimentally impact on the important heritage setting of St Stephen’s Green – the city’s oldest and largest Georgian square.

However, consultants for the New York Stock Exchange-listed Kennedy Wilson, Stephen Little & Associates, don’t believe that there will be any significant adverse planning effects from the scheme.

The consultants argue that the proposal represents an efficient and sustainable use of scarce development lands.

They contend that the proposal delivers a carefully designed and scaled development, which respects the existing conservation setting and makes a positive architectural contribution to the character of the area.

A decision is due on the application later this month.

7 Rohan wins in planning row with Powerscourt Hotel over amphitheatre