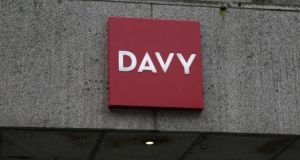 Davy needs to “very promptly” address concerns surrounding the fact that former senior executives involved in a controversial bond trade remain major shareholders in the group, the Minister of State at the Department of Finance, Seán Fleming, has said.

The group of 16 individuals involved in a 2014 trade at the centre of a €4.1 million regulatory fine and rebuke last week, for breach of market rules, are estimated to own at least a third of a business that is estimated to be worth about €400 million.

A number of Davy staff who left the company in recent years have been forced in the past week to tell associates they were not part of the 16, according to sources. This will likely add to pressure on Davy to confirm the identities of the remaining individuals who were involved.

Mr McKiernan is the largest shareholder in Davy, with an estimated 13 per cent. Mr McLaughlin is reported to retain about a 5 per cent interest. Mr Nangle, Mr Garry and Mr Smith are each understood to continue to hold valuable stakes.

A holding company at the top of the corporate structure, called Ailmount Investments, established under a management buyout of the business from Bank of Ireland in 2006, counts Mr McKiernan, Mr McLaughlin and Mr Smith as its directors, according to the Companies Registration Office.

“The issue of people who have major shareholdings in that company continuing to have a major influence on the operations, even though they may have resigned from their executive roles, is a matter than needs to be dealt with very promptly,” Mr Fleming told RTÉ Radio on Sunday.

It is expected the issue of shareholdings of former executives involved in the rogue bond trade will form a part of a review that the board of Davy has committed to carrying out in an effort to draw a line under the scandal.

“Davy recognises the seriousness of matters raised by the [Central Bank of Ireland] investigation and the requirement for near-term answers and actions, balanced by the requirement for due process in respect of the range of stakeholders involved,” a spokesman for the firm said. “The independent directors are committed to ensuring that their review of the findings is fully informed by independent expert advice by parties not previously involved in the process.”

He declined to comment further. Meanwhile, the Oireachtas finance committee will question Central Bank deputy governor Ed Sibley and director general for financial conduct Derville Rowland on the Davy investigation on Tuesday. The committee has also extended an invitation to Davy representatives to come before its members.