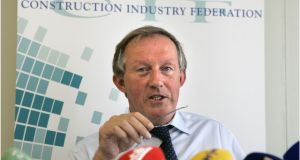 Any move to axe the Help to Buy scheme would compound the housing crisis, the Construction Industry Federation (CIF) has warned.

The industry lobby group says the scheme has created a viable first-time buyers market and means that banks are once again lending to builders who are constructing starter homes again.

The government scheme, which provides tax refunds of up to €20,000 to first-time buyers purchasing newly-built homes, has been blamed as a major contributor to rapidly rising house prices in the past year.

The Government has announced a review of the scheme amid concerns that it has not delivered an adequate supply of housing.

Data published by the Central Statistics Office on Tuesday said residential prices grew by 2.2 per cent last month – the biggest monthly increase since July last year. On an annualised basis, the pace of price rises accelerated to 11.9 per cent in May, up from 10 per cent in April.

In Dublin, prices are 15 per cent higher than last year. However, CIF director general Tom Parlon said house price inflation was largely a feature of the second-hand home market.

In a submission to an independent impact assessment on the scheme, the CIF argues that the scheme is justified by the “positive impact it is having”.

“Our members can confirm that residential building has been made more viable in key locations on account of its introduction by assisting prospective house purchasers with the deposit level, which is now required under the Central Bank’s macroprudential mortgage lending rules on loan-to-value ratios.

“It is quite simple: first-time buyers can buy homes, so building them becomes viable.”

Mr Parlon said the tax incentive had been a significant contributor to the growth in residential construction activity, with figures for commencements, completions and registrations in the first two months of 2017 all significantly ahead of 2016 figures.

The CIF argues that, with the scheme only in place since late last year,there has not yet been enough time for the benefits to flow through in terms of increased supply. It estimates that about 18,000 new homes will be built this year compared to 12,666 in 2015.

“Any suggestion of a withdrawal of this scheme could have a detrimental impact on confidence and the ability of house builders to maintain and increase their residential building programmes.

“The average price of a Help to Buy scheme home is €250,000,” Mr Parlon said, “and while it costs the Government €15,000 or so, it then yields €100,000 back in tax. That’s more than a six-fold return to the exchequer, so I think people are looking in the wrong direction when they lay the blame for current price inflation at the feet of the Help to Buy scheme.”