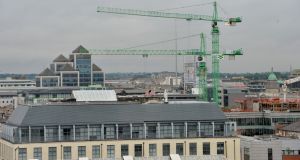 Cranes on the Dublin skyline. Industrial action by crane operators is expected to spread.

Strike action by crane operators is expected to spread significantly by Friday after workers resumed their action over pay on Tuesday.

Unite, which represents the strikers, said its members had placed pickets at the Gem site at the Bridewell in Dublin. The union said its members would expand the action by placing pickets at sites operated by members of the Construction Industry Federation (CIF) on Friday. Up to now industrial action by crane operators involved those employed by agencies or companies outside of the CIF.

The federation said last week that the union was seeking increases of 80 per cent in pay for crane operators and that this was was “ unrealistic and unsustainable”.

In a statement on Tuesday, Unite said the industrial relations approach being adopted by CIF director-general Tom Parlon was “damaging to the construction sector and CIF members”.

The union criticised remarks made by Mr Parlon at the weekend in which he said Irish cranes were “Mickey Mouse” compared to those in other cities and that crane operation was not “rocket science”.

Unite regional secretary Jimmy Kelly said: “Trade unionists still remember Mr Parlon’s remarks branding electricians as ‘lunatics’ during a previous dispute and his decision over the weekend to run down both the Irish construction sector and our members does not bode well for resolution of this dispute.

“At a time when construction sector profits have doubled since 2012 while wages remain below 2004 levels in real terms, our members are determined to ensure that construction workers share in the sector’s recovery and that crane operators’ wages reflect the levels of skill and responsibility involved in the job.

“Our members’ overwhelming vote to extend our industrial action to relevant CIF sites stems from their frustration at the CIF’s refusal to engage. Mr Parlon’s remarks over the weekend have simply hardened our members’ resolve, and are damaging to the construction sector, the CIF and the companies Mr Parlon represents, ” Mr Kelly said.