Company on course for ‘satisfactory’ year 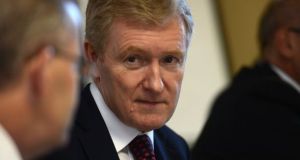 Profit at building group Abbey fell in the year to April 30th as finance income at the firm fell and operating costs increased.

But the company still beat analysts’ expectations, with pretax profits of €58.6 million ahead of the €50.1 million predicted by Davy analysts.

It was an 8 per cent decline on the previous year’s figure, when the company recorded €63.5 million in profit. Revenue for the year was €218.5 million. It paid €9.7 million in tax, with earnings per share at 282.22 cent. Group operating profit was €58.5 million compared with €60.8 million a year earlier.

The decrease in profit could also be attributed in part to the larger contribution made by its UK business, and the impact of house price increases and currency exchange on the results.

The company completed 606 units in the year, with the majority of these - some 524 - in the UK. That was also part of the reason why the company managed to beat analysts expectations.

“The main driver of the better results stems from a smaller than expected fall in UK house building margin,” Davy analysts said in a note. “In spite of uncertainty around Brexit, the company is targeting growth in activity across all businesses. It is on course for another satisfactory year.”

The company also doubled its Irish house sales, bringing the total to 75 from 39 in the previous year. Abbey said the Government’s Help to Buy scheme has helped to support increased activity in the construction market

“In Ireland our projects in Ratoath and Cabinteely made good contributions to our results. Further growth is being actively pursued with new projects in Navan being brought into production,” the company said. “Plans are well advanced for the resumption of our developments in Laois when conditions allow.”

The company added sites in Dublin, Meath and Waterford over the year.

Rental income during the year was €1.2 million, and the group held €78.9 million in cash at the end of the financial year.

In the Czech Republic, the company said it sold land in Lucištníku, with a surplus of €2.2 million over its written down value, and its Tetínská project complete, with 70 per cent forward sold.

At the year end, the group said it owned and controlled land allocated for housing development for the supply of 3,164 plots.

However, the company warned of rising levels of uncertainty in its markets.

“The level of uncertainty with which we have to cope, continues to rise. By this time next year the UK will likely be outside of the EU and facing a higher risk premium on all UK investments,” it said. “A disruptive Brexit will also impact unfavourably on the remaining 27. The group backed by its strong balance sheet will continue to invest to meet the need for new homes in all its markets.”