Revenue rises 8 per cent in first six months of 2018 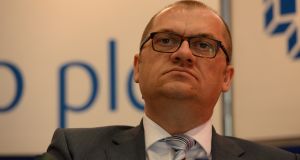 The hot weather has led to booming business for builders merchanting and DIY group Grafton, with revenue up 8 per cent in the first half of the year.

In a trading update, the company, which owns the Woodies brand in Ireland, among others, said the warm weather had benefited the businesses.

“The very cold conditions experienced in March and April have been followed by a hot and dry May and June which has benefited a number of businesses, particularly Woodie’s,” chief executive Gavin Slark said.

Revenue from the company’s retailing business increased by 13.4 per cent, with manufacturing revenue up 21 per cent.

Grafton’s brands include Chadwicks, Heiton Buckley and Woodie’s in Ireland; Selco, Buildbase, Plumbase, Leyland SDM, MacBlair and CPI EuroMix in the UK; Isero and Gunters en Meuser in the Netherlands and YouBuild and MPRO in Belgium. It has more than 12,500 employees.

Mr Slark said the company was pleased with the group’s performance. “In the UK, the group’s growth has been influenced by the Selco store opening programme and the acquisition of Leyland SDM in February, where we are pleased with progress to date,” said Mr Slark. “Our businesses in Ireland and the Netherlands continue to perform well. We enter the second half well placed to deliver our expectations for the financial year.”