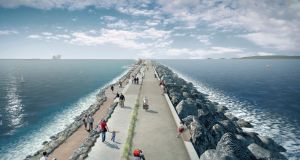 The timing could hardly have been more awkward – just hours before the controversial expansion of Heathrow was approved in a messy vote at Westminster, government ministers finally scrapped a groundbreaking £1.3 billion (€1.48bn) green energy project in Wales.

The Conservative party has long boasted of being “the greenest government ever” but the twin decisions on Monday render that claim even more hollow than it was before.

Under cover of the uproar over approval of a third runway for London’s largest airport, the government rejected plans for the Swansea tidal lagoon project, which would have created an important new source of renewable energy for the UK.

The rejection, on grounds of cost, comes after years of prevarication that has left the project in limbo. And it comes almost a year and a half after the idea won the backing of an independent government review.

Harnessing the energy of the tides on the Welsh coast was first conceived, although on a much smaller scale, by a green energy charity in 2003. The ambitious final plan would have seen the construction of a 10km, U-shaped sea wall in Swansea Bay with turbines generating enough low-carbon energy to supply 155,000 homes.

Swansea would have been followed by other, larger, tidal projects on the Welsh coast, which would have increasingly brought down the cost of the energy produced.

No government funds were required for the construction of the Swansea Bay plan, which would have been privately funded. But to make the figures work, the company behind the project needed a guaranteed price for its power, such as has been granted to the new nuclear power station at Hinkley Point in Somerset.

These price guarantees are funded via a long-term levy on household energy bills, and it is this that the government rejected as poor value for money, rendering the Swansea project unviable.

The decision was greeted with widespread dismay. There was fury in Wales, where the project would have provided a significant boost to employment with an estimated 2,000 new jobs.

“Another crushing blow to Wales,” said Welsh first minister Carwyn Jones, who claimed the plan would have won government backing had it been proposed in Northern Ireland. The Welsh government had pledged £200 million funding in a last ditch attempt to secure support from Westminster.

As the row over Welsh wave power rolled on, so too did the long-running battle over the expansion of Heathrow airport. The irony of the government scrapping one green project even as it backed Heathrow was lost on precisely no one.

Shadow business secretary Rebecca Long-Bailey said that not only had the government defied all logic, it had failed to make the right decision for “the future of our planet”.

“Scrapping the tidal lagoon on the same day as supporting a third runway at Heathrow is a kick in the teeth not only for Wales but for the renewables sector and industries outside the capital,” she said.

Meanwhile campaigners warned the decision to go ahead with the £14 billion expansion of Heathrow – a debate that has been dragging on for decades – would be an environmental disaster.

The government comfortably won the vote to proceed with a third, two-mile long runway at the airport, but proceedings in the House of Commons had earlier threatened to turn into farce, thanks – not for the first time – to Britain’s bumbling foreign secretary, Boris Johnson.

It was Johnson, you may recall, who publicly pledged he would lie down in front of the bulldozers rather than allow expansion at Heathrow. His west London constituency of Uxbridge and Ruislip lies directly beneath the airport’s flight path and his constituents are vehemently opposed to the additional noise and air pollution that will be created, not to mention the 800 or so homes that will have to be demolished to make way for the runway.

Like other Tory MPs, Johnson was required to vote in line with his government and in favour of the expansion. The only alternative would have been to resign from the cabinet, as fellow minister Greg Hands did last week.

But the foreign secretary had a wizard wheeze. He fled London at the last minute to avoid having to vote at all. For several hours on Monday, nobody in Westminster, or even his own department, appeared to know which country he was in, or even which continent.

Eventually located in Afghanistan, Johnson returned from his spurious trip on Tuesday morning. No prizes for guessing which airport he landed at.