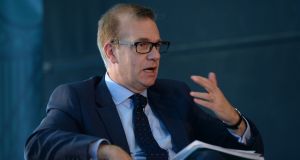 Simon McKeever, chief executive of the Irish Exporters Association, says it is British exporters’ responsibility to ensure they have the correct information ready for customs when sending goods across the Irish Sea.

Post-Brexit red tape is continuing to stall deliveries to businesses in the North and Republic.

New rules that followed the UK’s exit from the EU at the beginning of the month require goods moving between Ireland and Britain to be accompanied by customs declarations to avail of zero tariff rates.

Businesses in the North, which remains part of the UK but has a customs border with Britain, continue to encounter problems getting deliveries from there, as suppliers blame paperwork hold-ups.

Information provided by one company, which did not want to be named, shows invoices for building materials valued at more than £30,000 (€34,000), ordered in December, still with the British supplier a month later.

A note from the supplier said the company had two pallets due for delivery to the customer in the North, but was “still awaiting some paperwork to come through” before sending them.

British suppliers have also told customers in Northern Ireland they would cease delivering to the region, or have asked that they arrange their own shipping and pay the customs costs themselves.

Simon McKeever, chief executive of the Irish Exporters Association, confirmed on Thursday that problems rooted in British companies’ lack of preparation for Brexit continued to dog trade between the two countries.

He said it was British exporters’ responsibility to ensure they had the correct information ready for customs when sending goods across the Irish Sea. “Many businesses in the UK still do not know what they are supposed to do,” he said.

The problem is having a knock-on effect on exporters, as it means that trailers which could be used to carry goods to Britain are being held up by delays there.

Mr McKeever acknowledged that there were some improvements on last week. “There’s more stuff coming in, but it’s in trickles, it’s still a very serious issue,” he said.

Another factor playing into the uncertainty is that volumes are still low, as this tends to be a slow period for trade, while there was some stockpiling ahead of the final Brexit date last month.

Businesses selling goods to the EU from the UK, and vice versa, must confirm the products’ origins. Thus companies must make import and security declarations.

In addition, hauliers have to provide shipping companies with completed pre-boarding notifications, which avoid checks and delays at the destination.

Revenue last week said many businesses in both Ireland and Britain were either not prepared at all for Brexit or had not taken sufficient steps to ensure they were ready for the UK’s departure from the world’s biggest trading bloc.