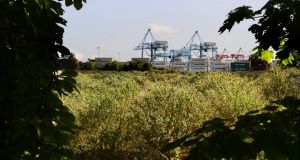 The Irish Glass Bottle site at Ringsend. Ronan Group Real Estate (RGRE) and Oaktree signed up before Christmas to pay €200 million to buy an 80 per cent stake in the company holding the 37-acre site from Nama. Photograph: Cyril Byrne/The Irish Times

Developer Johnny Ronan and US investment firm Oaktree have hired property investment bank Eastdil Secured to advise on debt financing options for development of the Irish Glass Bottle site and an adjoining plot in Dublin, according to sources.

Mr Ronan’s Ronan Group Real Estate (RGRE) and Oaktree signed up before Christmas to pay €200 million to buy an 80 per cent stake in the company holding the 37-acre site from Nama.

Long a symbol of Celtic Tiger hubris, the largest vacant plot in the capital is expected to deliver up to 3,800 homes, 25 per cent of which are earmarked for social and affordable housing, as well as 1 million sq ft (92,903sq m) of commercial space. There are also plans for a school and public open spaces.

UK property news website React News first reported this week that Eastdil has been hired to advise on debt financing for the project, which has an estimated gross development value of more than €3.5 billion. The initial target is to raise more than €100 million for early-stage works, sources confirmed.

“This site can be a catalyst for Dublin’s future development. We look forward to unlocking its potential and, in particular, to delivering thousands of residential units – both private and social – to meet the city’s urgent need,” said a spokesman for RGRE, who declined to comment on financing plans.

Asking prices for houses surged 6 per cent in the Republic last year, property website MyHome.ie, which is owned by the publisher of The Irish Times, said last week in a report that warned “too much cash is chasing too few homes”.

Experts had expected property values to decline in 2020 in the face of mass unemployment and a hiatus in economic activity brought about by the pandemic. However, the market has defied expectations, with asking prices strengthening.

Lioncor, a property development company jointly owned by Oaktree and Dublin-based Alanis Capital, will play a key role in delivering homes on the site, in which Nama will retain a 20 per cent interest.

RGRE and another US investment company, Colony, were selected by Nama in late July as preferred bidders for a controlling stake in the land and given 30 days to complete. However, The Irish Times reported in October, long after the initial completion deadline had passed, that RGRE had changed partners to join forces with Oaktree.

Industry observers questioned Colony’s original involvement in the bid, as it was known at the time to be seeking to sell down other Irish holdings, including joint-venture projects with RGRE.