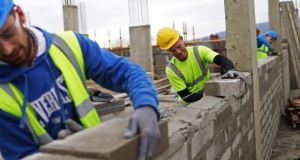 Cairn reported a strong second half in what it described as a “stop-start year” due to Covid with 743 new homes closed.

Cairn Homes shares surged on Wednesday to levels last seen at the onset of the Covid-19 crisis almost a year ago as the housebuilder revealed its earnings for 2020 will be better expected and it announced the forward sale of 150 apartments and duplexes for €48.6 million.

While the Dublin-listed company said its operating profit for last year is expected to have fallen to €24.1 million from €68 million in 2019, the figure was 20 per cent above Goodbody Stockbrokers estimates and 32 per cent ahead of what Davy analysts had pencilled in.

Cairn reported a strong second half in what it described as a “stop-start year” due to Covid-19, with 743 new homes sales closed, which was better than the market had expected. Second-half revenues totalled €260 million, versus €435.3 million a year earlier. Some €14 million in turnover came from non-core site sales as against €32.2 million in 2019.

The full-year gross margin is expected to be 16.3 per cent with a slightly higher margin delivered in the second half.

Cairn said it will “significantly increase” unit sales and profitability this year. However, it held off providing guidance on 2021 performance due to the uncertainty surrounding the current lockdown, which has hit the construction industry.

“The ongoing Covid-19 pandemic continues to remind people of the importance of the value of communities and the quality of their living environment, boosting the demand for well-built family homes,” the company said.

Cairn said its 2020 full-year sales mix was heavily biased towards starter homes which had an average selling price of €354,000, including VAT. It added that demand for well-built new homes was “greater than ever”.

It ended last year with €34 million in gross cash and a net debt position of €170 million.

The housebuilder also announced a forward sale of 150 apartments and duplexes destined for the rental market at Shackleton Park, Lucan to Carysfort Capital, an Irish investment firm headed by Michael Looney, and New York asset manager Angelo Gordon, for €48.6 million.

It marks the third such deal between the two investment firms and Cairn Homes. Last January, the housebuilder sold 220 units that were under construction in Lucan to Carysfort Capital and Angelo Gordon for €78 million.

Carysfort bought an apartment block on Hanover Quay in central Dublin from Cairn for €101 million in 2019 with Angelo Gordon cash.

“Overall a very solid update from Cairn, which coupled with a robust order book and a well capitalised and invested balance sheet derisks the prospect for significant cash generation in 2021 and beyond,” said Goodbody analyst Robert Eason.

Shares in Cairn were up 3.1 per cent at €1.05 shortly before the close of busienss on Wednesday, having earlier hit €1.07, its highest level since early March last year.