Four Chinese citizens each give €400,000 to housing charity in exchange for residency 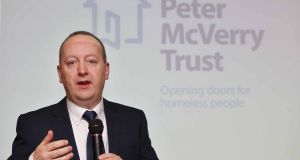 Housing charity Peter McVerry Trust raised €1.6 million through a Government cash-for-residency scheme that has lured more than €820 million in total to the Republic.

More than 1,100 non-EU citizens have bought the right to live in the Republic by putting at least €1 million into approved businesses or giving up to €500,000 to charities through the Government’s Immigrant Investor Programme (IIP).

Peter McVerry Trust confirmed to The Irish Times that it raised €1.6 million in charitable donations through the programme, joining hospitals and other housing bodies that have received money in this way.

The organisation took the cash to buy seven properties that it used for social housing, according to its chief executive, Pat Doyle.

He confirmed that under the scheme, four Chinese citizens donated €400,000 each to the Peter McVerry Trust.

The charity applied to the programme, administered by the Department of Justice, in 2019. It received the money in January last year.

Mr Doyle stressed that the trust specifically sought endowments, as investments have to be returned within a set period of time, and the board did not believe that this was a prudent way for the organisation to raise cash. “The trust did not want to go down the investment route,” he explained.

Since the government began the IIP in 2012, 1,162 people have invested or donated a total of €826.5 million to businesses and charities. Chinese citizens accounted for 1,088 of those who got residency rights through the IIP.

Figures released by the Department of Justice show that wealthy non-EU citizens paid €249 million for about 3,500 social homes in the Republic under the programme between 2012 and 2019.

However, the department cautioned that approval for these projects “does not equate to actual builds”.

Paul Davis, founder of Nephin Whiskey, said that the company was in the process of raising investment through the programme, but added that as the process was not complete, he did not want to give the amount sought.

“We have previously raised €1.5 million from the IIP,” Mr Davis said. He added that the scheme has benefitted small and start-up businesses.

Non-EU citizens who invest in businesses must pay a minimum of €1 million and leave their cash with the enterprise for at least three years, although most companies require it for longer. It is repaid to them after that time. Charity donations are not repaid.

Property business Bartra confirmed recently that it was organising a €2 million endowment for Beaumont Hospital in Dublin for a new operating theatre under the programme.

Also under the IIP, it facilitated €1.6 million in Chinese charitable donations to Tallaght Hospital, to pay for robotic surgery equipment. Bartra did not charge for organising either donation. Separately the company has used the IIP to secure investment for social housing.

Developers say Irish banks are unwilling to fund social housing projects, while private equity funds charge high interest rates when they back these developments. Consequently, builders argue that the IIP is a viable alternative.

Several EU countries as well as Canada, the UK and US all have versions of the IIP, offering residency rights to non-citizens in return for investment.