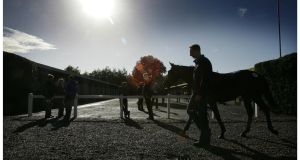 Goffs’ complex near Naas, Co Kildare houses its auction ring, stables and other facilities for its clients, but the company has been looking to make use of spare capacity there. Photograph: Alan Betson

Bloodstock auctioneer Goffs plans to invest €10 million in building a 50-bedroom hotel on its property in a bid to lure tourists and racegoers.

Kildare County Council has given Goffs permission to build a hotel on its land close to Naas, the company confirmed on Wednesday.

Goffs’ complex houses its auction ring, stables and other facilities for its clients, but the company has been looking to make use of spare capacity there.

The partnership hopes the equine-themed hotel will attract the auctioneer’s own clients, racegoers attending nearby racetracks, the Curragh, Naas and Punchestown, as well as tourists.

Éimear Mulhearn, Goffs’ chairwoman, predicted that the hotel would benefit the company’s Irish and international clients, allowing them “to avail of the facilities and reside on site” for its sales.

“We believe the proposed equine theme for the hotel will prove very popular with racegoers attending the three Kildare race tracks and visitors to the many equine and retail attractions in the county,” she added.

Mr Doyle said that the hotel would be a four-star property, located close to the Goffs sales ring.

He explained that the partnership believed the venture would “add significantly to the county’s tourism and hospitality infrastructure”.

Mr Byrne added that the venture was combining many years of experience to build a hotel that guests could use a base for a series of activities.

The county council pointed out that Kildare’s reputation was already tied to its reputation for thoroughbred breeding and racing.

“Already home to three racecourses, the Irish National Stud and a thriving equine industry, the addition of this equine-themed, premier accommodation offering will be a significant and positive development,” the local authority said.

Goffs has operations in Ireland, Britain, through its merger with Doncaster Bloodstock Sales in 2007 under the Irish company’s brand, and France, through a stake in a sales company there called Arqana.

In the Republic, it hosts auctions through the year, culminating in the Orby sale in September, which draws clients from global bloodstock industry, including Co Tipperary-headquartered Coolmore and Newmarket, UK-based Godolphin.

NTMA seeks to raise up to €3bn in bond sale