National rate of vacancies drops to 4.8%, but much higher rates remain in some counties 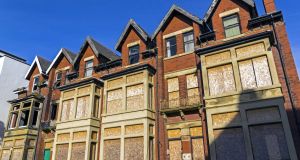 Some 95,114 properties are vacant across Ireland, a figure that equates to 4.8 per cent of the national residential housing stock, a report has found.

The GeoView Residential Buildings Report, published by a body backed by An Post and Ordnance Survey, found that the rate of vacant dwellings had dropped from 4.9 per cent on the previous report in June.

Of the 26 counties examined in the report, 14 recorded vacancy rates above the national average with Leitrim, Roscommon and Mayo having the highest vacancy rates at between 13 and 16 per cent.

Dublin had the lowest vacancy rates at 0.8 per cent, while and its surrounding commuter counties including Kildare and Wicklow had vacancies of between 2 and 2.5 per cent of the total housing stock.

The report found that 93 per cent of residential homes across the country were occupied in December 2017, and 2 per cent of properties were holiday homes.

The report also notes that 36,218 dwelling were added to the GeoDirectory database in 2017. That includes properties that may have been converted from one unit into multiple units or properties and apartment blocks that are still under construction and doesn’t mean that there are 36,218 new properties.

However, it is a significant increase on 2011 when about 12,000 buildings were added to the database.

“Building is heavily concentrated around Dublin and surrounding counties, while demand for housing stock remains at a high level. While progress has been made, there is still work to do in order to meet demand,” said Dara Keogh, GeoDirectory chief executive.

On property prices, the report noted that the average residential property price rose from €239,025 last year to €262,061 in 2017 with Dublin, and in particular Dublin 4, having the highest average prices. Longford, meanwhile, was the only county in the survey that recorded an average price lower than €100,000.

Separately, Sherry Fitzgerald chief economist Marian Finnegan told Newstalk Breakfast on Wednesday that she estimated property prices would increase by about 8 per cent next year with house prices currently hovering about 23.7 per cent below their 2007 peak.

The most recent property price inflation figures show that prices increased by 12.1 per cent in the 12 months to the end of October this year.