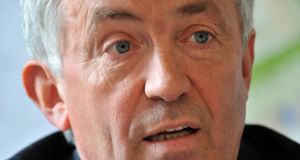 Developer Michael O’Flynn argues that the current 3.5 times income ratio that banks must apply to mortgage applications was too low, and should be increased to 4.5 times, a level allowed by financial regulators in the UK

Property developer Michael O’Flynn has told The Irish Times that he would support in principle a tax being imposed on those who are hoarding development land until house prices increase further.

However, he believes such a levy would be difficult to police and should not be used to punish developers who are unable to build on their land because of issues surrounding planning, zoning or a lack of infrastructure.

“In principle, I would support a tax on anyone who is hoarding land, but what does hoarding land mean?” he said. “I don’t know any developers who hoard land because if they can build on it and make a profit, then of course they would do so. It can’t apply to people who are actively developing but are having to do it in phases.”

Mr O’Flynn also said he would reduce the prices of his new houses immediately if the Government reduced the rate of VAT from 13.5 per cent to 9 per cent, a lower rate that has been applied to the hospitality sector since 2011.

“I will drop the price of my houses and apartments if the cost of VAT is reduced but the other great thing is that it would allow me to bring more housing into the market because there would be more viability.

“We cannot afford the current tax take out of houses. The government has to understand the supply issues we have and do something about it.”

He said the VAT rate should be reduced until the housing market normalises again. Reducing the VAT level to 9 per cent would cut the cost of a €300,000 new home by €12,000.

“The market isn’t functioning and it won’t function until you get a price point that works for the average couple,” he said, adding that developers were not making “superprofits” in the current market. “A lot of schemes are not being built because they are not viable.”

Mr O’Flynn also argues that the current 3.5 times income ratio that banks must apply to mortgage applications was too low, and should be increased to 4.5 times, a level that is allowed by financial regulators in the UK.

The Corkman said there was a major issue with supply and warned that the country could be heading for a “price bubble” due to a lack of new housing coming to the market.

“I would say house prices are heading into a dangerous place,” he said. “Government policy is not working. There isn’t enough buy-in at Government level to deal with the supply side.

“We are working our way towards a new price bubble that isn’t far away, and it’s caused by a scarcity of new houses, not by the [Government’s] Help-to-Buy scheme, which is attracting a lot of political comment at the moment.”

“Because we lost the best part of a decade [due to the economic crash] we need a special measure to catch up. The Government policy is not working and it needs to change.”

Mr O’Flynn’s companies are currently building on 10 sites in Dublin and Cork. They completed about 200 new houses last year and he expects to produce a similar number in 2017.

He has more than 600 acres of land available for development but only about 200 acres have the necessary planning permission in place.

Mr O’Flynn said he was “anticipating” eventually being able to develop his entire landbank.