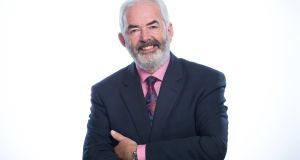 Simplyfruit founder Patrick McCann: “We believe that the market for healthy eating products will continue to grow.” Photograph: Richie Stokes

The eldest of 11 children, Patrick McCann grew up among the famous apple orchards in Co Armagh that were to play a significant role in shaping his future business career.

The founder and managing director of Craigavon-based Simplyfruit can trace his first earnings as a young boy from picking wild rosehips from the hedges in the neighbouring countryside, along with strawberries, potatoes and apples in the local orchards. His early teenage years were spent working during holidays in the family business which developed from selling door-to-door to wholesale fruit markets in Belfast and Dublin.

Simplyfruit has grown from a small start-up venture in 1990 to become the largest fruit-processing company in Ireland, with annual sales in excess of £10 million and a staff of more than 100 people.

Having left school at 17, Patrick enrolled part-time at Queens at the age of 26. Graduating with a BA degree, he was also awarded the Abatti prize for the most worthy student in recognition for his achievement after he had overcome life-threatening injuries in a horrific car accident half way through his course.

Outside of work, Patrick is heavily involved in sport, with a particular passion for horseracing and GAA. In 2011, he developed Brookland Stables, his own private equine centre to train and breed thoroughbred racehorses.

Patrick is also the main sponsor of the Armagh County GAA football and hurling teams and is involved with Portadown Rugby Club. In addition, he participates in community and charity work and is currently the chairman of his local parish council.

“By 2020 our plan is to increase our sales to £15 million by developing the Simplyfruit brand. We would like to see our products available in every convenience store throughout Ireland. My two eldest children have joined the company over the past year, so I’m looking forward to watching them take the business on to the next level, harrowing all that I have ploughed!

Successfully leading the company through a period of strategic change. In the early 2000’s I made a big decision to completely exit the original business which had thrived for many years. We were producing commodity products but were coming under increasing pressure from cheap imports and very aggressive competitors. By recognising these changes before they had an irreversible impact on the business, and also by recognising the rapid changes in consumer eating habits, I implemented a strategy of innovation, new product development and investment which subsequently resulted in the company successfully diversifying into new emerging markets for valued healthy-eating products.

I always review the previous day’s production and sales figures. I also have a quick look at our online current account.

Any implications from these two events which result in wildly fluctuating exchange rates, new tariffs, or mean a restriction on the free movement of people in the labour market, will have an impact on our business. We import fruit from the four corners of the world and, typical of many food production factories, we depend heavily on EU labour.

The plan to reduce corporation tax in NI would be an obvious stimulant; the quicker it can be introduced the better, as the proposal has been dragging on for too long now.

We believe that the market for healthy-eating products will continue to grow as the warning messages from the health-promotion professionals gain further momentum.