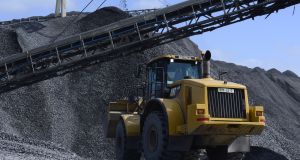 Deutsche upgrades CRH from hold to buy despite caution in the markets on the chances of company hitting medium-term targets. Photograph: Cyril Byrne

CRH is only expected to achieve a third of the target it has set to expand earnings margins by 2021, leaving room for a large positive surprise if delivered, according to analysts at Deutsche Bank.

The Dublin-based group said in May last year it planned to boost its earnings before interest, tax depreciation and amortisation (Ebitda) margin by three percentage points – or 300 basis points – to 15 per cent by 2021. It also aims to have €7 billion to spend on deals, share buybacks and other ways of creating value for shareholders.

“Over the period, we include only 100 basis points of Ebitda margin improvement,” said Deutsche Bank analysts in a report on CRH on Thursday, adding that this is in line the consensus view in the market.

They added that, if CRH delivered all 300 basis points, it would push market expectations for CRH’s 2021 net earnings up 20 per cent.

CRH reported last month that its Ebitda for the first half rose by 36 per cent to €1.54 billion, driven by acquisitions.

However, the Deutsche Bank analysts said that like-for-like growth amounted to 5 per cent. Still, they expect the rate to pick up to 7 per cent in the second half of the year, mainly due to improving asphalt margins in its Americas Materials unit.

While CRH’s shares have performed well against European peers so far this year, they have underperformed US-based Martin Marietta and Vulcan, leaving them at a historically low valuation discount to those two.

“With better performance in the Americas Materials division expected in the second part of the year, we see scope for a re-rating /[of CRH’s shares/],” the Deutsche Bank analysts said, with their new price target of €35 pointing to some 14 per cent upside from current levels, prompting them to upgrade their stock rating to buy from hold.