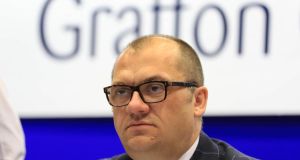 Grafton chief executive Gavin Slark said the company was pleased with its progress in the face of UK uncertainty. Photograph: Nick Bradshaw

The Heiton Buckley, Chadwicks and Woodie’s DIY owner said its adjusted operating profit for the six months ended June 30th was £97.7 million, up from £92.4 million the year before.

“The stock’s rating has bounced along at multi-year lows, which leaves the group attractively valued. Near-term volatility may well persist, but we are confident that patience will ultimately be rewarded,” Davy analyst Flor O’Donoghue wrote in a note to clients.

In results issued for the first half of this year, Grafton said it had agreed the sale of its Belgian business, which has a total value of about £28 million. The sale of the business to private-equity company Aurelius will enable it put capital into higher-margin businesses, Grafton’s chief executive, Gavin Slark, told The Irish Times.

The company, which has the bulk of its operations in the UK, expects a managed exit for the country from the European Union. Nonetheless, it has built up a reserve of about £20 million worth of products there may be an issue with in the event of a no-deal Brexit.

“We can make certain preparations but in reality we’ve got to focus on running a business,” Mr Slark said, adding that the company’s Irish business has limited exposure to products coming through the UK.

“We very much have a growth agenda – it’s not a case of waiting to see what happens in October.”

Grafton’s operations in the Republic have seen double-digit growth over the past number of years but in its latest set of results growth across its builders’ merchants operations has slowed to 8 per cent. However, Mr Slark believes that housing supply still lags demand and expects “further growth to come”.

Grafton, which has operations in Ireland, Britain, Belgium and the Netherlands, saw group revenue rise 2.5 per cent to £1.44 billion.

Acquisitions and new branches contributed revenue of £21.3 million helping to offset a revenue decline of £24.9 million from the disposal of two small, non-core UK businesses in 2018 and branch consolidations.

Woodie’s, the market leader in the DIY, home and garden market in Ireland, “benefited from favourable trading conditions and a good response from its customers to the continued development of the Woodie’s offering”.

In terms of outlook, Grafton said the signs in the Irish economy “remain positive”. Some moderation in the pace of growth in consumer spending “is expected” following the strong performance of recent years.

The company has increased its interim dividend by 8.3 per cent to 6.5p from 6p.