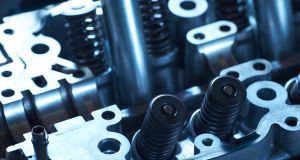 BMD’s accounts show that Meptagon bought 32,813 shares in BMD, 75 per cent of the company, in March in a deal that neither party announced at the time. Photograph: iStock

Israeli company Meptagon has bought a majority stake in Irish engineering contractor BMD & Company which could have been worth about €7 million on the basis of figures in the Irish firm’s accounts.

Little Island, Co Cork-based mechanical engineering contractor, BMD, designs and builds facilities for the pharmaceutical, oil and gas and energy industries, among others.

BMD’s accounts show that Meptagon bought 32,813 shares in BMD, 75 per cent of the company, in March in a deal that neither party announced at the time.

While the pair did not reveal the sale price, figures in BMD’s accounts indicate that the stake bought by Meptagon could have been worth slightly more than €6.9 million.

This transaction implied that the company was worth more than €212 a share after Mr Lynch left and redeemed his stake. That would have put a €6.9 million price tag on Meptagon’s stake.

BMD managing director Mike Walsh explained that a confidentiality agreement with Meptagon prevented him from commenting on the sale price.

He also pointed out that Mr Lynch retired from the company some time before the sale to the Israeli player and stressed that the two transactions were entirely unrelated.

Mr Walsh predicted that Meptagon’s investment would open new opportunities for BMD. The company intends opening a Dublin office in coming weeks, which it will use to bid for work from businesses such as pharmaceutical and semi-conductor manufacturers.

Semi-conductor giant Intel plans a €3.5 billion expansion at its Irish factory in Leixlip, Co Kildare. BMD has not worked in this industry but Meptagon has experience in the sector.

Mr Walsh stressed that BMD was not doing any work for Intel, but did not rule out bidding for such contracts in the future.

He said that BMD would focus on building its business around Dublin before looking at moving into other European countries. He indicated that its new shareholder was prepared to provide cash to back any expansion plans.

Mr Walsh and the rest of BMD’s managers are staying with the company. “It’s very much business as usual,” he said.

Meptagon approached BMD as it was looking to get a foothold in the Republic and potentially Europe. “It’s been very good so far,” Mr Walsh said. “We have been on a number of trips to Israel and the cultures of the two companies have gelled extremely well.”

Recently-filed accounts show that BMD almost doubled profits to €3.9 million in 2018 while revenues reached €49 million. “This year will not be too far off last year’s results based on current projections,” Mr Walsh said.

Meptagon is an engineering contractor that serves the pharmaceutical, bio-tech, micro-electronic, food and drink and, oil and gas, industries. It has been trading since 1960 and has revenues of about €50 million.