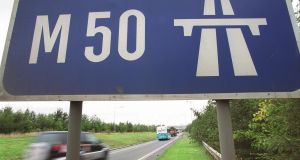 Tackling bottlenecks in transport, housing and other key areas will require the Republic to tap additional sources of cash from Europe, builders will tell TDs on Tuesday.

A Construction Industry Federation (CIF) submission to the Oireachtas Committee on Budgetary Oversight warns that shortfalls in State spending on roads, housebuilding and services such as water treatment threaten future growth.

The federation calls on the Government to seek extra cash for infrastructure spending from both the European Investment Bank (EIB), which has an office here, and the European Fund for Strategic Investment (EFSI), which is keen to finance projects in areas such as transport, health, energy and housing.

“The CIF encourages the Government to leverage the presence of the new EIB office in Dublin in its efforts to find ways to fund major infrastructure projects,” the submission says. It adds “every effort” should be made to explore the scope to secure as much additional funds as possible from the EFSI.

The submission argues that if extra cash for infrastructure spending does not materialise, this will increase the cost to the economy in the short term as efficiency is lost, and the longer term as the Government will have to upgrade facilities and services over time.

EU rules aimed at ensuring that spending in euro zone countries is sustainable over the medium and longer term limit the State’s ability to invest, the CIF says. It points out the Government will have €11.3 billion to spend between this year and 2021.

The Government’s capital plan originally provided €27 billion for infrastructure spending between 2016 and 2021. The budget added another €6.6 billion to this.

The CIF also wants the Government to suspend the introduction of its so-called rainy day fund, into which it plans to put €1 billion a year from 2019 to provide a buffer against future economic shocks. The federation argues the Government should hold off on this for a year, which would allow it to spend more money on public building projects.

Official figures show the Republic is bottom of the European league for investing in infrastructure. The State spends less than 2 per cent of the total wealth it generates on this, compared to more than 6 per cent for countries such as Bulgaria and Hungary.

The submission recommends the Oireachtas either sets national investment targets in legislation or sets a lower limit below which spending should not drop, as this would help ensure infrastructure spending keeps pace with economic growth.

The federation points out that the European Commission’s country report for the Republic confirms that poor infrastructure and housing shortages are making it difficult for both multinationals and home-grown companies to invest here. “Investment in infrastructure is essential to sustaining the economic recovery and competitiveness,” the CIF says. “The quality of infrastructure is a key prerequisite for an economy to function efficiently and effectively.”