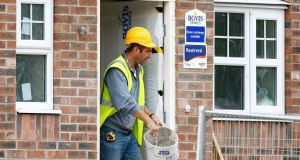 Bovis Homes Group jumped the most in eight months in London trading after the UK homebuilder said it is in talks to be bought by competitor Galliford Try.

Bovis said on Sunday that talks are ongoing with Galliford Try after it rejected an offer from the company. It ended discussions with Redrow over an earlier bid.

Bovis is searching for a new chief executive officer after David Ritchie stepped down on January 9th. It has struggled recently, saying last month said it would complete 10 per cent to 15 per cent fewer homes this year as it slows work to correct customer-service issues.

The shares have risen less than 1 per cent this year through last week, compared with a 10 per cent rally in the FTSE 350 Household Goods and Home Construction Index.

“Neither proposer is desperate to do this deal as land is readily available in the open market, but there is scope to improve operating margins at Bovis significantly,” Liberum Capital analysts wrote in a note to clients Monday. “We still think there could be other potential buyers.”