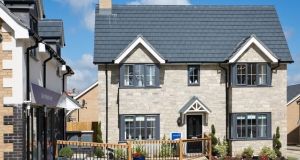 A Bovis home in Truro, England: the combination of companies would create a top-five UK housebuilder with a market value of about £2.5 billion (€2.84bn) and output of more than 6,700 homes a year

Bovis Homes is in talks with rival Galliford Try to strike the first large-scale merger in the UK housebuilding sector since 2007, after it rejected a competing approach from Redrow.

Bovis said on Sunday that it had turned down an initial offer from Galliford Try but remained in discussions with the FTSE 250 housebuilding and construction group about a revised deal.

The combination would create a top-five UK housebuilder with a market value of about £2.5 billion (€2.84bn) and output of more than 6,700 homes a year.

The talks follow a crisis at Bovis, which suffered an outbreak of customer complaints last year after it handed over unfinished homes to buyers as it struggled to meet production targets.

The company’s chief executive, David Ritchie, resigned in January following a profit warning. Bovis’s share price has dropped 31 per cent since its peak in late 2015, to 828p a share, giving it a market capitalisation of £1.1 billion.

Galliford Try said it had initially offered an equity split of 52.25 per cent for its shareholders and 47.75 per cent for Bovis’s. That would have valued Bovis at £1.19 billion, a 7 per cent premium to Friday’s closing share price.

Bovis said it had rejected that – and a cash and shares offer from Redrow – as neither proposal “reflected the underlying value of the Bovis business”.

“Redrow subsequently indicated that it was not willing to improve the terms of its proposal and discussions were terminated. Discussions with Galliford Try are ongoing,” Bovis said in a statement.

Redrow and Galliford Try have until 5pm on April 9th under the Takeover Code to announce a firm intention to make an offer or walk away.

Bovis has been the subject of takeover speculation for some time, but analysts have questioned whether its £1 billion land bank – which contains consented plots for 18,700 homes – was worth the cost of an acquisition, given the relative ease of buying land directly in the current market.

However, with its land bank focused on southern England, Bovis would enable Galliford Try – which focuses on west and south-west England and the east Midlands – a gateway into new geographical areas.

Galliford Try said on Sunday that a merger would “create a new major housebuilder with national scale and geographic coverage”, while offering “significant synergies”.

A person close to Bovis said its board was “not inimically opposed to a deal, but opposed to a cheap deal”, highlighting that the group’s net cash of £39 million meant it was not under pressure to reach an agreement.

Galliford Try reported pre-tax profits of £63 million for the six months to December, up 19 per cent, on revenues of £1.3 billion.

Bovis is hunting for a new chief executive while its finance director Earl Sibley temporarily leads the group. It said in February it would slow production this year to 10 to 15 per cent below 2016 levels as it sought to revamp its construction systems and customer service. It has set aside £7 million to fix existing homes. Pre-tax profits for 2016 came in at £155 million, below expectations.

A merger would be the largest deal among listed housebuilders since the combination of George Wimpey and Taylor Woodrow in 2007 to create Taylor Wimpey, then the UK’s largest housebuilder. But the debt-laden group came close to collapse in 2008 as the financial crisis hit, reporting a loss of £1.84 billion that year.