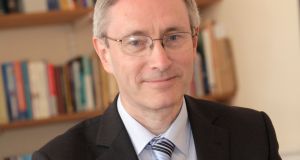 The Nevin Economic Research Institute has called for the establishment of a new semi-State housing company to supply the market with more affordable rental accommodation.

In its latest quarterly outlook, the trade union backed think-tank said the collapse in building output since the crash had resulted in chronic housing shortages, resulting in spiralling prices and rents.

It claimed the Government’s policy to date of relying on the private sector to meet demand had “not worked”.

To remedy the problem, the institute proposes the establishment of new semi-state company that would borrow money long-term at low rates.

It would use this money to commission the construction of around 50,000 new homes over five years and the purchase of an additional 20,000 vacant dwellings.

Tenants would be charged rents commensurate with the finance and construction costs of the properties, which is how similar housing agencies in Europe operate.

The institute suggested the total capital investment required would be around €12 billion, with the initial €3 billion coming from the State via Strategic Banking Corporation of Ireland (SBCI), which would then be used to leverage a further €9 billion.

By claiming “a very significant place” in the market, the new housing company could help exert downward pressure on rent increases and, at the same time, contribute to higher supply, it said.

In its report, the institute said the outlook for the Irish economy remained positive, noting domestic demand, the bulk of which comes from consumption and investment, would drive growth in 2017 and 2018.

It forecast growth in gross domestic product (GDP) would be 3.8 per cent this year and 3 per cent next year, which was roughly in line other agency forecasts.

The think-tank noted that employment growth in the economy last year averaged 3 per cent with end-year total employment reaching an estimated just over two million. While this was the highest fourth quarter total since 2008, employment was still 100,000 below its 2007 peak.

“Our baseline assumption is that the economy is not yet overheating and that there remains some limited scope for above trend growth and the working through of pent-up demand,” it said.

“Notwithstanding the distortion arising from activities of certain multinational companies, it is clear that the real economy of the Republic has been growing strongly. This is, also, in spite of Brexit related headwinds and the fall in the value of Sterling.”