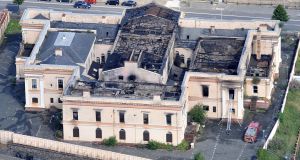 Belfast’s infamous Crumlin Road Courthouse, the location for supergrass and paramilitary trials during the Troubles, is to be transformed into a luxury hotel.

Liverpool-based hotelier and developer Lawrence Kenwright, who owns the Signature Living Group, confirmed in France on Tuesday that he has acquired the now derelict courthouse and intends to spend £25 million (€28.5 million) restoring the listed building.

Mr Kenwright announced details of his plans at the Belfast stand of the MIPIM property investment conference in Cannes. Last month he also outlined ambitions to develop a George Best-themed hotel in Belfast. He said at that time that he may develop up to four hotels in the city, creating up to 500 jobs.

Up to 70 business and council leaders from Belfast are currently attending the conference, which attracts 28,000 people, to promote new investment and development opportunities in the city.

On the Belfast stand, Mr Kenwright promised to preserve the architectural heritage of the courthouse, which was designed by Charles Lanyon and built in 1850.

“The Crumlin Road Courthouse is the latest in a series of landmark heritage buildings to be lovingly restored by Signature Living,” he said, “including 30 James Street – the former headquarters of the White Star Line in Liverpool – and Cardiff’s historical Coal Exchange building. We see ourselves simply as custodians of these important buildings, and the courthouse will very much still belong to the people of Belfast.

“For us, this is an investment in the local Belfast community and, as well as committing around £25 million to the restoration project, we will be investing in a series of community initiatives, including the launch of a special apprenticeship academy, in the coming months.”

Mr Kenwright’s plans would create a unique setting for a luxury hotel in a location that bore witness to nearly 150 years of legal judgement.