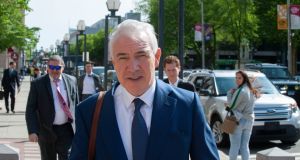 The judge in bankrupt developer Seán Dunne and his wife Gayle Killilea’s American civil trial has sent the case to a magistrate judge for possible settlement.

This move comes 10 days after the jury in the US trial awarded €18.04 million to Mr Dunne’s US bankruptcy trustee, Richard Coan. The jury found against Mr Dunne and Ms Killilea over the illegal transfer of some assets to put them beyond the reach of creditors.

“We can keep litigating, but I would think it makes sense for you to make one more run to resolve the issue,” US district court judge Jeffrey A Meyer told lawyers from both sides on Friday.

If the parties fail to reach a settlement, the case will return to Judge Meyer for further litigation.

Lawyers for Mr Dunne’s US bankruptcy trustee filed a request in advance of the hearing to freeze Ms Kilillea’s American assets, including a Connecticut home valued at more than $3 million, and compelling her to move additional assets into the US to meet the costs of the judgment.

They wrote in their motion that this was necessary because Mr Dunne and Ms Killilea “have intentionally structured their financial affairs to shield monies and assets from discovery by creditors [and bankruptcy officials] and to place them beyond the reach of the legal process”.

This matter was also sent to the magistrate by Judge Meyer.

Lawyers for Mr Dunne and Ms Killilea indicated they were open to settlement talks but also told Judge Meyer that they intended to ask him to set the verdict aside and order a new trial, the first step towards an appeal.

Neither Mr Dunne nor Ms Killilea attended the proceedings in the US district court in New Haven, Connecticut.

At the prodding of the judge – who at the start of Friday’s hearing referred to the case as “this long-running saga” – both sides said on Thursday they were open to a settlement.

“The trustee is always willing to talk to resolve this matter,” said the plaintiff’s lawyer, Timothy D Miltenberger.

Judge Meyer said he would refer the issue as well as the plaintiff’s request to freeze Ms Killilea’s assets to US magistrate judge Robert M Spector and give the parties 45 days to try to work out resolutions. Magistrate judges assist US district court judges in their duties.

Judge Meyer has yet to rule on additional counts in the case that were not decided by the jury, including unjust enrichment, which could increase the award to the plaintiff. He ordered the plaintiff’s attorneys to submit a brief on the matter.

In arguing for an order freezing assets, the plaintiff’s lawyers alleged that the couple were purposely concealing money and property that could be used to pay the award.

They painted a picture of millions of euro hidden in a complex web of business entities and bank accounts in the United Arab Emirates, Cyprus and the Isle of Man.

In arguing for the order, the trustee’s lawyers cited what they said was Mr Dunne and Ms Killilea’s aggressive resistance to producing documents prior to the trial. In one instance, Mr Dunne was found in contempt in relation to his destruction of emails concerning Walford, a Shrewsbury Road house, they wrote.

The jury concluded that Mr Dunne’s transfer of the property to Ms Killilea was fraudulent and included its sale proceeds in the award.

Attached to the motion is a copy of a South African court ruling that appears to provide a peak into family law issues discussed behind closed doors during the trial. The decision says that Mr Dunne and Ms Killilea concluded a separation agreement in June 2010 that stated she had no personal income.

In his closing statement, plaintiff’s attorney Thomas Curran suggested the couple had feigned marital discord as part of their scheme to fraudulently transfer assets from him to her.

Attorneys for both sides declined to comment following Friday’s hearing.

In the trial, the trustee’s attorneys successfully argued that Mr Dunne gave Ms Killilea millions of euro in assets, including Walford – a Dublin home he purchased for €58 million that was later sold for €14 million – to shield them from creditors as his business empire was imploding.

Jurors didn’t agree with the plaintiff’s argument in all instances, finding no fraud in additional millions of other asset transfers from Mr Dunne to Ms Killilea.

The couple denied any scheme to shield assets, saying the transfers dated to before Mr Dunne’s financial problems and were intended to assure Ms Killilea’s independence and the future of their children.