Ballymore and Hines on shortlist for €100m site beside Croke Park 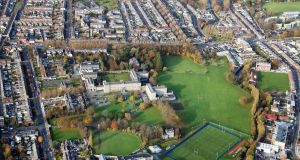 An aerial view of the Drumcondra portfolio.

Developers including Sean Mulryan’s Ballymore and US real estate group Hines are believed to be among the leading bidders vying for a north Dublin site close to Croke Park, which is on the market for an estimated €100 million.

The site comprising more than 19 acres is in Drumcondra, close to Croke Park, which forms part of a larger site being sold by the Catholic Archdiocese of Dublin to the GAA. Its expected that the site will attract bids of €100 million or more given the scope to develop up to 1,200 apartments and other residential accommodation.

Industry sources suggested that developer Sean Reilly and Joe O’Reilly’s Chartered Land had also made the shortlist. Efforts to secure comment from Sean Reilly through the offices of his company McGarrell Reilly were unsuccessful. Joe O’Reilly, meanwhile, did not return a call seeking comment.

The so-called “Drumcondra portfolio” is adjacent to lands the GAA is acquiring to develop extensive sporting and recreational facilities, and a new hotel.

The archdiocese announced in November 2018 it had entered into exclusive negotiations with the GAA to sell the former Holy Cross seminary and adjoining lands.

A brochure sent to potentially interested parties said the site’s master plan “envisages a new residential quarter with over 1,200 apartments and local neighbourhood centre, together with extensive sporting and recreational facilities and a hotel, on adjoining lands”.

The brochure says the private rented sector is “the most vibrant part of the Irish property investment market” and has “considerable potential for growth”.

Despite Dublin having restrictions on rent increases, “average residential rents in Dublin are currently rising by 7.8 per cent per annum”, the brochure noted.

Any future plans for the property must have “significant elements of legacy and community gain”, and will “need to display creative factors that lift it above most development projects in the city”.

The site, between Clonliffe Road and Lower Drumcondra Road, is being sold by way of a “structured best-bid process”.