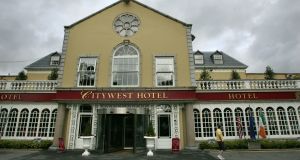 Irish investment group Tetrarch Capital has announced the completion of a deal to acquire the Citywest Hotel in Saggart, Co Dublin, by buying out the interest of its joint-venture partner, California-based Pimco.

Currently the largest hotel in Ireland, Citywest features 764 rooms, 30 different meeting and/or event venues, a convention centre with physical capacity for up to 8,000 people and an 18-hole, par-70 championship golf course.

The transaction was supported by a €60 million loan from Starwood European Real Estate Finance Limited, an affiliate of Starwood Capital Group, and the funds will be used to buy out Pimco from the previous partnership structure.

Tetrarch said the funds would also be used for the ongoing refurbishment and repositioning of Citywest into Ireland’s “leading hotel, conference and entertainment destination”.

Starwood has also provided an additional €9 million loan to finance the conversion of 80 aparthotel units into 84 residential apartments at Westpark Apartments.

The six apartment blocks are adjacent to the golf course at Citywest Hotel, and the redevelopment is due for completion by October 2019.

The hotel has undergone an €11 million investment programme since Tetrarch’s involvement began in 2014, upgrading guestrooms and common areas, including the lobby, bar, restaurant and reception areas.

Tetrarch Capital chief executive Michael McElligott said it had always been the firm’s ambition to become the long-term owners of the hotel.

“We remain very optimistic for the future of the hotel, convention centre and our wider holdings in the area, and will continue to invest in plans we have for the further enhancement of Citywest as Ireland’s pre-eminent conference destination,” he said.

“The transaction continues our strategy of seeking out good risk adjusted opportunities with high-quality partners,” he said. “Ireland remains one of the primary target markets for Starwood European Real Estate Finance as part of its broader European investment strategy.”