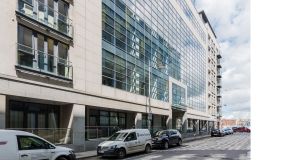 Hibernia Reit has sold a south docklands office block for €6.9 million more than it paid for it 14 months ago.

The sale, in which Bannon acted for the vendor and Knight Frank for the purchaser, is to a German pension fund which has secured an initial yield of 4.65 per cent. This off-market transaction underlines the considerable weight of international capital competing for exposure to the Dublin market.

After buying the building, Hibernia quickly agreed to let it to Regus on a 25-year lease from mid-2018 at an initial rent of €1.8 million and a nine-month, rent-free period. This letting was also handled by Bannon.

Prior to its sale last year, it had been used as serviced offices by Fitzwilliam Properties since 2006. A number of high-profile foreign direct investment companies – including LinkedIn, PTC Bio, Indeed, Zendesk and Future Finance – got their first taste of the south docklands through short-term rental arrangements at No 77.

The area around the building is one of the most vibrant hubs in the docklands, with the tenant line-up including Accenture, Airbnb, BOI, Facebook, Google, State Street, TripAdvisor, Matheson, LogMein and BNY Mellon.

It will be interesting to see if the sale of 77 will renew interest in the nearby Reflector office block on Hanover Quay which went on the market in February through Savills and CBRE with a guide price of €155 million.

This prime block is probably the standout Dublin asset on the market at the moment. It will produce an annual rent roll of about €7 million and, given its asking price, would suggest a net initial yield of 4.2 per cent.

No 77 is within 10 minutes’ walk of Luas and Dart services and is close to the Bord Gáis Energy Theatre and the 3 Arena.