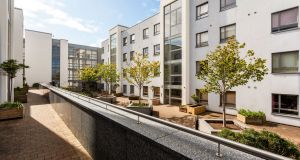 UK-headquartered SeaPoint Capital, has paid €7.2 million for a portfolio of 30 apartments at the Grove Court development in Blanchardstown, Dublin 15.

The price paid is slightly more than the €7 million agent Hooke & MacDonald had been guiding when it brought the apartments to the market on behalf of receivers Duff & Phelps last September. SeaPoint can expect to secure a gross yield of 6 per cent.

The Blanchardstown deal represents the latest transaction to have been conducted in Ireland by the investment vehicle SeaPoint established to make specific investments in the private rented sector.

In November 2017, the company paid Green Reit €9.25 million for a portfolio of 63 apartments at the mixed-use Arena Centre in Tallaght, Co Dublin. The portfolio forms part of a wider scheme comprising a total of 230 apartments, retail and offices and a 119-bedroom hotel.

The 30 apartments SeaPoint has acquired in its latest deal meanwhile sit within a development of 79 units located directly adjacent to the landmark Blanchardstown Centre. As one of Ireland’s largest shopping centres, Blanchardstown has more than 180 stores distributed across 1.3 million square feet of retail space.