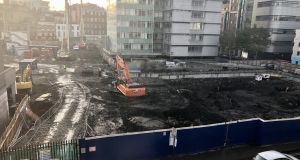 The new application also includes a partial increase in heights of the permitted Apollo House and College House re-developments.

The owners of the Savoy Cinema in Dublin have put the brakes on the Marlet Group amending its ambitious plans for the Apollo House, College House and Screen Cinema site near Dublin’s Pearse Street.

The new application also includes a partial increase in heights of the permitted Apollo House and College House redevelopments.

The Dublin Cinema Group is holding up the application over fears of the impact the Marlet Group’s planned entertainment venue could have on the Savoy cinema. It cites a deal the two sides entered into concerning the new venue.

In a letter to the council, the director of the Dublin Cinema Group, Paul Ward said that on completion of the sale, Balark Investments entered into a deed of covenant with the Dublin Cinema Group that it wouldn’t use any part of the Pearse Street site as a “cinema or theatre venue of any kind” for 20 years from February 2016.

As part of the parent permission however, the Marlet Group secured planning for the 500-seat entertainment venue.

Mr Ward claims that the operation of such a venue would breach the covenant. He said his firm initiated High Court proceedings against the Balark and in response Balark undertook in writing not to use the entertainment venue as a cinema or theatre venue of any kind.

Mr Ward said arising from that, he has pressed Balark to disclose the actual intended use of the space. He stated that during the course of a discovery application he found that Balark had not decided on a use for the space.

Mr Ward demanded that the council seek further information from Balark on its plans given that Balark has agreed not to put a cinema or theatre venue of any kind in the development.

The council granted planning permission after concluding that the development “is likely to provide a valuable asset to the regeneration of the local area”.