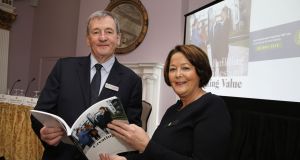 Profit at Ires Reit, the largest landlord in the State, more than halved in the first six months of the year despite an increase in rental income, its interim report shows.

The Dublin-listed company, led by chief executive Margaret Sweeney, saw profits for the six months to June 30th, 2018, fall to €34.1 million, which was down from €69.5 million compared with the same period the year before.

The drop in profit can largely be attributed to a reduction in the net movement in the fair value of investment properties. It increased by €22.5 million this year due to revaluation, but this figure was down on the €57 million increase the year before.

EPRA earnings, which are a measure of underlying operating performance, increased by 17.7 per cent to €15.3 million in the period. This was up from €13 million in the same period last year.

Meanwhile, the report also shows that director pay, including benefits and pension, went up to €721,000 from €694,000 the year before. Ms Sweeney is the only executive member of the company’s board.

Remuneration of the non-executive directors totalled €189,000 for the period, which was up from €154,000 the year before.

The company declared its intention to declare an interim dividend of 2.7 cents per share for the six months ended 30 June 2019.

“Since Ires was established in 2007, we have invested a total of €1.035 billion in the Irish housing market resulting in an overall supply of 3,884 professionally managed units (this includes our recent Marathon acquisition),” she said.

“Our long term commitment to the Irish market is now well established and we are well underpinned for future growth. The strategy we are deploying is delivering both for our shareholders and for the Irish economy.”

Ires Reit has a portfolio of 2,771 residential units with a further 298 units contracted under pre-purchase contracts and development.

“Together with the recently announced acquisition of the Marathon Portfolio of 815 units, this will increase our portfolio to 3,884 units, representing growth of about 45 per cent since December 2018,” said Ms Sweeney.

“In addition Ires has the potential opportunity to invest in delivering 628 units on owned sites, 200 of which have planning permission with 428 units at Rockbrook in the planning process, awaiting decision.

“We completed the refinancing of our debt facilities during April with a new syndicated revolving credit facility of €450 million, and increased this to €600 million in June, to part finance the Marathon acquisition and other purchase contracts.

“This facility is at a lower interest cost than the previous facility and extends the maturity to 2024, with options to extend further to 2026.”

Declan Moylan, the chairman of the company, said the board believed the positive economic outlook for Ireland and the property market “will lead to continuing growth of the private residential rental sector and delivery of our growth strategy”.

In terms of outlook, Ms Sweeney said that despite improvements in housing output, the main theme in the residential market in Ireland remains “a large mismatch between supply and demand for homes, including for private rental accommodation”.

“Strong FDI, growth in the indigenous economy, behavioural and social shifts together with continued strong population growth, continue to support a very favourable environment for continued investment by the group and delivering sustainable long term returns for shareholders,” she said.

“The latest quarterly bulletin from the Central Bank projects housing completions of 24,000 in 2019 and 28,000 next year. It will be some time in the next decade before output rises to meet the flow of new demand.”

On Brexit, Ms Sweeney said the UK’s exit from the EU “could have an impact on housing demand, which would be beneficial to the group”.

“However, depending on trade and supply chain impacts, the withdrawal could drive up the costs of inputs, such as building materials and equipment, which could impact the group’s development plans, as well as maintenance activities for existing assets,” she said.