Rathmichael site for 10 detached houses on market for €3m

Site extending to 7.6 acres is within grounds of Shankill House 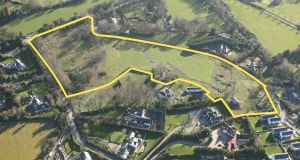 The site in the south Dublin suburb of Rathmichael id close to transport links such as the M50 and N11.

A ready-to-go site for 10 substantial houses in the south Dublin suburb of Rathmichael is quoting €3 million through agent Savills.

This sale is within the grounds of Shankill House, a grand 19th century dwelling extending to 539sq m (5,800sq ft) off the exclusive Ferndale Road.

Shankill House does not form part of the sale. It last came on the market in 2014 for €1.5 million while its grounds, then extending to 7.3 acres, were offered separately for €2.5 million. Both were bought by the same purchaser and the house has since undergone some refurbishment.

A larger proportion of the lands (8.164 acres) subsequently came on the market in 2017 at more than €3.8 million but this site has now been reduced to accommodate better access to Shankill House.

The area, characterised by substantial houses on large sites, is within a five-minute drive of Shankill village. Transport links – such as the M50 and N11 – are close by, as is the Dart in Shankill and the Luas green line at Cherrywood.