Site for up to 850 homes in Clonburris development for €11.5m 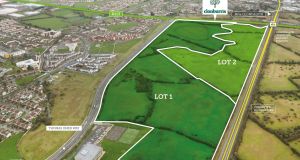 A second large residential site within the Clonburris strategic development zone (SDZ) in west Dublin is on the market and adjoins an even bigger site which was launched just last month.

According to the agent and subject to planning permission, the site being launched this week could accommodate up to 850 residential units while the adjoining site may house about 950 homes.

In addition, the agent suggests the combined sites could include 22,185sq m (238,797sq ft) of commercial space.

These sites account for almost 15 per cent of Clonburris SDZ and their acquisition would given the purchaser a strategic stake in developing a new town about 12km from Dublin city centre.

Plans for Clonburris, between Lucan and Clondalkin, envisage a new town of about 21,000 people in 8,400 homes (at least 2,700 will be social and affordable) delivered under the SDZ “fast-track” planning system.

They will be located on 280 hectares of former farmland on both sides of the Dublin-Kildare railway line and the Grand Canal. Part of the Clonburris development will adjoin Adamstown – Dublin’s first new town of the 21st century – where housebuilding has restarted in earnest to ultimately deliver about 8,000 homes.

Plans for Clonburris were approved in May 2018 by South Dublin County Council. An Bord Pleanála heard an appeal to these plans over three days at the end of January and a final decision is due shortly. Some councillors and locals expressed concerns about what they claimed was a lack of detail in the SDZ in relation to schools, transport and housing.

The board can overturn, amend or pass the SDZ planning scheme. If it is approved the council can grant permission for developments which cannot afterwards be appealed to the board. This would, in theory, allow for construction of homes to start two months after an application is made.

Nicky Conneely of Savills suggests that the Clonburris SDZ is “due to be formally adopted” in 2019 and will provide “specific detail” of what development the council wants to achieve at this location. “This means that if a developer applies for planning permission for a scheme consistent with the principles of the SDZ, they must be granted permission,” says Ms Conneely. “This provides a significantly reduced risk of delays with the planning process.”

Two separate zonings apply to the sites for sale under the draft SDZ. High density apartments and commercial space will be provided close to Clondalkin/Fonthill train station while a lower density zoning applies to residential lands in Clonburris “northwest”.

The sites are almost equidistant between the N4 and N7. A stop on the Dublin Bus route 40 is a two-minute walk from the site while Clondalkin/Fonthill train station is also a short walk away. It provides commuter train access to Dublin Pearse in about 30 minutes.

Grange Castle Business Park is about 3km away and is home to Pfizer, Takeda Pharmaceuticals and Cuisine de France. Park West Business Park, Fonthill Retail Park, Liffey Valley Shopping Centre and the Citywest campus are also near at hand.

Dublin has a well-documented deficit of affordable new homes. A national risk assessment presented to the Taoiseach last July pointed to the housing crisis lasting for the “foreseeable future”. Although the number of new homes being built has risen significantly, it still remains well short of the level required to meet annual demand.

1 In six months we will be in the grip of a 1980s-style recession
2 Angela Merkel sweeps in to save the euro zone
3 Property price drop of up to 12% this year a ‘reasonable’ assumption – McDonagh
4 Facebook looks increasingly immoral and thoughtless
5 Cork-based AI supply chain company Keelvar raises $18m
6 Mortgage approvals tumbled in first full month of lockdown – BPFI
7 Cycling made easier with an Irish-made electric bike
8 Ryanair to process all Covid-19 refunds within 10 weeks, Michael O’Leary says
9 Retailers ‘asked to work almost like hospitals’ during reopening
10 Chartered Land moves closer to approval for Dublin’s tallest tower
Real news has value SUBSCRIBE