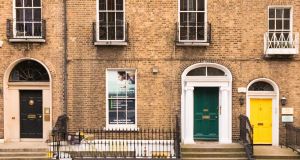 A Georgian house in Dublin 2 which came on the market last May at €1.7 million has sold for €1.825 million through agent Colliers International – about 7 per cent above the guide price.

This comes from Pat & Karl Henry Fitness Centre which occupies the basement and part of ground floor at a rent of €43,400 per annum. Two other office tenants bring the rent roll up to €63,600 per annum.

Seven pre-’63 residential units are vacant and require refurbishment but could be turned into attractive spaces given that plenty of the building’s period features are still intact. One-bed apartments in the area are quoting rents from €600-€700 a week on daft.ie.

Mandy Daly of Colliers says No 14 attracted “strong interest from local and UK private investors looking for value-add opportunities”. Its prime location, within walking distance of the city centre and public transport services, was a significant factor in its appeal.

The low capital value at No 14 probably reflects the work required to bring the property up to a modern standard.

Georgian property values have recovered strongly since the crash but are still less than half the prices achieved at the height of the boom. The Football Association of Ireland memorably secured close to €9 million for its 418sq m (4,500sq ft) headquarters at 80 Merrion Square in July 2007 – equating to a whopping €17,760 per sq m (€1,650 per sq ft) for this type of property.

Such assets are increasingly attracting interest from abroad as Asian and Middle East investors, in particular, have taken a shine to the sector lately. The lot sizes are attractive to smaller, family funds which are frequently outbidding local investors. Currency movements – in addition to Ireland’s growing economy and membership of the EU – are believed to be partly responsible for the surge in overseas interest.

1 Air travel never going ‘back to way it was’
2 Bank of Ireland sees more than 1,400 staff apply for redundancy
3 Should I switch bank now with Ulster Bank at risk of closing?
4 Coronavirus vaccine: 15 billion doses needed to inoculate the planet
5 BoI redundancies, ‘tax war’ warning for Ireland, and retailers in rent arrears
6 South Dublin land at €19m has scope for up to 500 homes
7 French investor acquires Cherrywood office investment for €27.7m
8 O’Flynn Group in bid to build 1,137 homes on Dublin’s Naas Road
9 Hostelworld chief financial officer TJ Kelly to step down
10 Will brother’s widow get half of our parents’ estate when they die?
Real news has value SUBSCRIBE