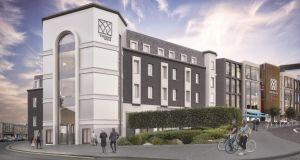 Trident House in Blackrock, Co Dublin, is a four-storey over basement block with 21 car-parking spaces.

Zurich Insurance is to expand its presence in Blackrock having just agreed to lease the refurbished Trident House office block which adjoins the shopping centre.

While no rent has been revealed, the going rate for similar space in the area is about €323 per square metre (€30 per square foot).

The insurer has already agreed to occupy an adjoining block, Enterprise House, which is due to be completed in the last quarter of 2019. Its 20-year lease on the 6,503sq m (70,000sq ft) block is at a rent in the mid €30s per square foot.

Zurich is already a long-term tenant in the area but is expected to vacate the Zurich House and Blackrock Hall blocks – both of which face the bypass – when its leases expire. The move to occupy Trident House, which extends to 1,690sq m (18,200sq ft), may allow it to increase its workforce in Blackrock to nearly 1,000.

The Trident House letting – Zurich were represented by Neill McNicholas of JLL and landlord Friends First by Keith O’Neill of BNP Paribas Real Estate – is for a 20-year term and at a rent about half the going rate in the city centre.

Trident House is a four-storey over basement block with 21 car-parking spaces. It was occupied by the Office of Public Works for more than 30 years but has just been revamped as part of the ongoing redevelopment of the shopping centre.

Claire Solon, head of property at Friends First, says the letting marks completion of the first phase of redevelopment work on Blackrock Shopping Centre. “Our commitment to Blackrock is evidenced by the continuing investment we are making in the area as we continue our refurbishment plans with the recent commencement of the retail upgrade works to the shopping centre,” says Ms Solon.

Friends First is spending about €10 million on the shopping centre, which will include upgrading common areas, a new bespoke glazed roof and a new elevation to Frascati Road. Works are underway and will result in a number of new retail units in the centre with sizes from 47sq m (505sq ft) to 769sq m (8,277sq ft).

A new four-storey office block of 1,672sq m (18,000sq ft) forms part of this phase of works with a completion date of early next year. BNP Paribas Real Estate will be quoting a rent of €323 per square metre (€30 per square foot) for this space.

Blackrock is undergoing a building boom after many years of inactivity. Work is nearing completion on the extension and refurbishment of Frascati Shopping Centre. Owner Invesco Real Estate – a global investment manager – is spending more than €30 million to increase the size of the centre from 9,290sq m to 15,793sq m (from 100,000sq ft to 170,000 sq ft) in order to broaden its appeal.

There are also a number of large residential developments which recently secured planning permission in the area. Cairn Homes got the green light from An Bord Pleanála for 214 apartments and seven houses at Chesterfield off Cross Avenue. Meanwhile, a company associated with Paddy McKillen jnr is planning to develop 257 apartments off Temple Hill on a site that was formerly owned by a religious order.

Another 1.25-acre site with permission for 51 high-end homes at the corner of Maretimo Terrace and Newtown Avenue is on the market at €9 million through agent Cushman & Wakefield. Previously occupied by Europa Motors, it may – subject to planning permission – be capable of accommodating a higher-density scheme.

A collection of three adjoining modern office buildings beside Enterprise House fronting the Blackrock bypass may also be in line for redevelopment. The three buildings – Blackrock Hall, Zurich House and Blackrock Park House – have a combined 4,683sq m (50,409sq ft) on a site of 0.48 of an acre.

These came on the market last year through joint agents Lisney and HWBC at a combined 14.475 million and include on-site parking for 79 cars.

1 Communicorp says ban on Currency journalists strictly business
2 Chinese airline Junayeo Air postpones Dublin-Shanghai flights due to Covid-19
3 How can I view my dead brother’s will if I’m not the executor?
4 Appeals board grants planning for 354 Greystones homes
5 Hibernia founder becomes Doctor Bill Nowlan
6 Fáilte Ireland’s surprise competitor is ... Netflix
7 How do you know if you are wealthy? It’s not straightforward
8 A maverick taking on the Irish whiskey establishment
9 Knock gets visit from world’s largest passenger plane
10 Barclays scraps system monitoring how long staff spent at desks
Real news has value SUBSCRIBE