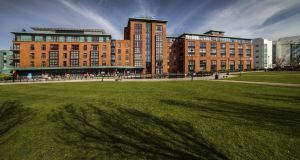 Purpose-built and first opened in September 2004, the hotel comprises 120 guest bedrooms, along with seven meeting rooms which can be combined to accommodate 300 delegates. There are extensive food and beverage facilities including The Gasworks Restaurant with 110 covers and The Gasworks Bar with 80 covers.

Located in the historic Gasworks area of Belfast, and overlooking the River Lagan, the hotel operates under the Radisson Blu brand with a 20-year management agreement in place with SAS / Rezidor Hotels from September 2004. The operator has an option to extend the agreement for five years.

The adjoining Lighthouse office building meanwhile comprises 60,000sq ft of office space with flexible floor plates and a double-height reception area. The office foyer and core areas, including toilets, have recently been renovated and extended. The six-floor building has onsite parking and is situated in the campus-style Gasworks development in close proximity to the city centre and a few minutes’ walk from Belfast’s CBD.