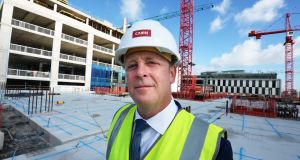 Two of the founders of listed Irish housebuilder Cairn Homes acquired 1 million shares in the company between them on Monday at a cost of just under €800,000.

In separate announcements to the stock exchange, Cairn said its chief executive Michael Stanley and non-executive director Alan McIntosh had acquired 500,000 shares each.

Cairn’s shares closed in Dublin on Monday up 2.1 per cent at 77.6 cent. However, the shares have declined in value by about 30 per cent since March, when lockdown restrictions were introduced here to curb the spread of the coronavirus.

Cairn is currently one of the largest housebuilders in the country with a current forward sales pipeline valued at €237 million.

According to its interim results, Cairn closed 207 new homes sales and generated total revenues of €80.9 million in the first half of the year, and was active on 15 sites.

1 House asking prices rebound but will likely fall again - MyHome
2 Plans for €2bn Dart expansion lure Bombardier to Dublin
3 Virgin Media unveils new entertainment platform
4 Google tells workers to return to country where they are employed
5 City firms move £1.2tn and 7,500 jobs out of London - EY
6 Will your boss let you work long-term from home – or from abroad?
7 TV guide: Pros and cons of broadcast television options
8 Construction sector 'unlikely to recover' before 2023
9 Irish food trade could slide by one-third if EU and UK fail to cut deal
10 There may be trouble ahead for the housing market
Real news has value SUBSCRIBE