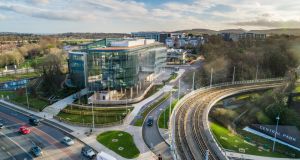 The biggest letting so far this year was Mastercard’s 245,500sq ft in One & Two South County at Leopardstown.

With Covid-19 continuing to disrupt the normal functioning of both the domestic and global economy, the level of take-up in Dublin’s office market this year could fall to below two million square feet for the first time since 2012.

That’s according to a new report on the sector from commercial real estate adviser HWBC.

But while the pandemic continues to contribute to a high level of uncertainty, HWBC’s latest Office Review says that a crash similar to the one between 2009 and 2010 is “unlikely” given the current absence of oversupply and the well-capitalised long-term investors who now underpin the Dublin market.

The impact of coronavirus has been dramatic nonetheless with the report finding a 36 per cent reduction in the level of take-up of office space in the first half of this year, when compared with the same period in 2019.

The imposition of the lockdown in the second quarter saw the volume of office letting activity come to a near standstill, having registered a record level of demand in the first three months when some 993,000sq ft of office space was taken up in the capital.

Unsurprisingly, demand for office space in the period prior to the lockdown was dominated by the tech sector. The biggest letting in the period saw Mastercard take 245,500sq ft in One & Two South County at Leopardstown in south Dublin. This was followed by Slack’s agreement to rent 135,000sq ft of the office accommodation under development at the Fitzwilliam 28 scheme on Fitzwilliam Street in Dublin 2; Dropbox’s decision to sign for 103,000sq ft at One Park Place on Upper Hatch Street; Guidewire’s agreement to take 85,000sq ft at Stemple Exchange in Blanchardstown, Dublin 15; and Google’s entry into an agreement for 72,000sq ft at Block 1 at Central Park in Dublin 18. Taken together, these top five transactions accounted for 640,500sq ft – or more than three times the amount of space Google had intended to occupy at the Sorting Office in the Dublin docklands, before walking away from the deal earlier this week.

As the Covid-19 pandemic continues, HWBC says developers are now “increasingly nervous” about delivering new supply to the Dublin market unless it is underpinned by a pre-let commitment from a blue-chip tenant. Of the 5.5 million square feet of space under construction for delivery in the city centre over the next three years, more than half is already pre-let to tenants.

Commenting on the outlook for the Dublin office sector, Tony Waters, managing director of HWBC, said: “Notwithstanding current uncertainties, we are optimistic that a softer market is not going to be the precursor of a crash given that, unlike 2009, there isn’t a glut of oversupply, and buyers are not loaded up on unsustainable levels of bank debt. With over half a million square feet of deals in active negotiation, and continuing strong demand from international technology firms for space, the Covid-19 impact in Dublin’s office sector is more likely a speed bump than a roadblock.”

And while HWBC acknowledges the potential negative impact of the working from home trend on the requirement for office space, it claims the argument has been “overdone”. In its view, tech companies will continue to drive demand in the Dublin market, notwithstanding the prevailing societal appetite for more flexible working arrangements.

On this, the report says: “Large tech companies have typically operated at a 50-70 per cent occupancy rate, and continue to expand in Dublin where they account for the bulk of the 500,000sq ft of space currently in advanced negotiation for completion before year end.

“Where working from home may have a bigger impact is in the professional and financial services sectors which typically have operated on a 100 per cent occupancy model, with all staff allocated a dedicated desk. These sectors will likely see significant changes, as a flexibility trend that might have taken place over 10 years is now accelerated over 12 months.”